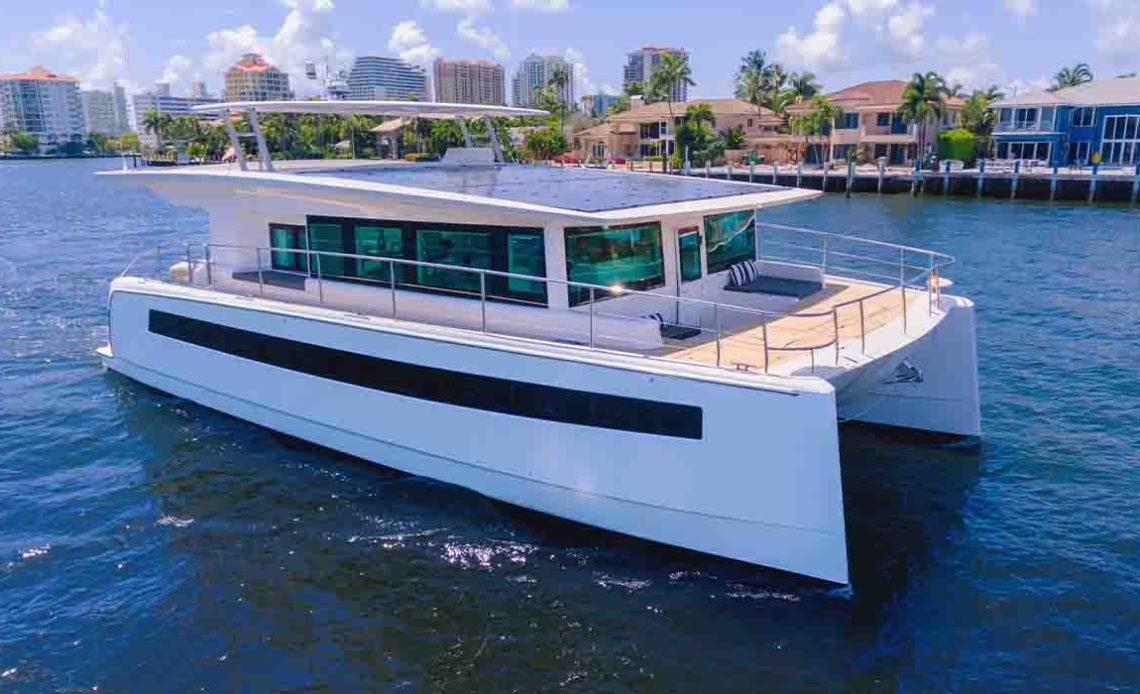 After previously following and reporting on Silent Yachts, the solar-electric boat maker invited me down to Fort Lauderdale, Florida, to experience a cruise on the vessel for myself. The SILENT 60 yacht is a solar electric catamaran that represents the future of zero-emissions maritime travel and a mere stepping stone to the more advanced vessels Silent Yachts is already developing next.

For those of you unfamiliar, Silent Yachts was founded by Heike and Michael Köhle, who together have sailed over 75,000 nautical miles around the world. Following their extensive travels at sea, the founders decided there had to be a better way to propel yachts with clean energy.

After a five-year trial at sea that began in 2010, Silent Yachts had a proven solar yacht concept, and began serial production of luxury sustainable vessels in 2016 with the SILENT 64. By 2018, The SILENT 64 had become the first serial-production solar-powered bluewater catamaran to cross the Atlantic, from Cartagena, Spain, to Barbados in 16 days.

In 2021, Silent Yachts launched the SILENT 60 yacht as a more powerful, revamped generation of its 64-foot predecessor. After accepting and invite from Silent Yachts to climb aboard the SILENT 60, I learned much more about the solar electric catamaran firsthand, in addition to what the company has in store next.

A (quick) trip aboard the SILENT 60 yacht

Following a quick visit to Silent Yacht’s North American office in south Florida, a couple of other writers and I were invited aboard the SILENT 60 – Silent Yachts 60-foot yacht mentioned above. Two things were particularly interesting about this voyage.

First, I was planning to be at sea all day, but that unfortunately was not the case. It was a trip just over an hour, but certainly enough time to explore the solar electric yacht and enjoy some time in the Florida sun cruising without any emissions.

Another interesting facet to this trip was that we were onboard with several potential customers as well. At a starting price of just over $2.75 million, it’s easy to imagine the level of affluence onboard, and since there were no real introductions, I used it as an opportunity to rub elbows with my ultra-wealthy deck mates.

At one point, one of the potential customers came up to me and asked if I was going to buy one. As a lowly writer no stranger to economy class flights, I naturally said “I’m seriously considering it, but I think I may go bigger.” That customer told me he was going to pull the trigger that day, and two other clients onboard also verbally committed to purchases and did in fact plan to go bigger.

This offers a testament to the quality and luxury of the SILENT 60 electric yacht – just 30 minutes aboard is all it takes to sell itself… as long as you have millions upon millions of dollars. I mean, the tax alone! The vessel we rode aboard had five bed across four separate cabins. Have a look at some of the interior images below.

Can this solar electric yacht perform? A look ahead

When we first untied and shoved off, it was amazing to experience how quiet the electric yacht was. I personally think this is a huge selling point for potential customers if you can get them on the water.

We were aboard the original two-deck version of the SILENT 60 yacht, which has since been replaced by the SILENT 62 three-deck option, based on the fact that a majority of customers favored the third deck. While our solar electric catamaran didn’t have the wing sail we covered when it debuted, it still had plenty of cool electrified specs to offer.

Truthfully, the SILENT 60 I got to ride upon offers clean quiet energy in the utmost form of luxury, but Silent Yachts isn’t the only one doing it. That being said, the electric yacht builder appears to be growing at a quick rate, especially in terms of innovation. Selling your products for multimillions probably helps with the R&D budget too.

Many of the features and customizations I was able to see up close on the SILENT 60 have already been improved and implemented on newer, upcoming electric yacht models. I already mentioned the three-deck layout, which can be assembled to multiple forms of open or closed walls depending on customer preference.

Silent Yachts is also going longer in its maritime range of available options. However, some of those larger vessels will be hybrid models to haul the larger ships, so that’s not much interest to me. What is of interest however are some of the new technologies Kyle Miller teased me with.

Silent Yachts is working on developing its own electric dingy which will sit on the rear deck of the SILENT 62 and in the hull of the SILENT 80. Other technologies mentioned were the possibility of liquid cooled batteries, and bi-directional charging.

The boat maker announced Silent Resorts earlier this year, focused on zero-carbon fully sustainable destinations for the electric yachts to venture to. Silent Yachts plans to use its all electric catamarans like the SILENT 60 yacht to help power the buildings, beginning in the Bahamas. Sign me up for that visit.

All in all, it was an interesting trip and I would love another chance to climb aboard one of Silent Yacht’s newer vessels – they clearly have plenty in their pipeline. Until then.