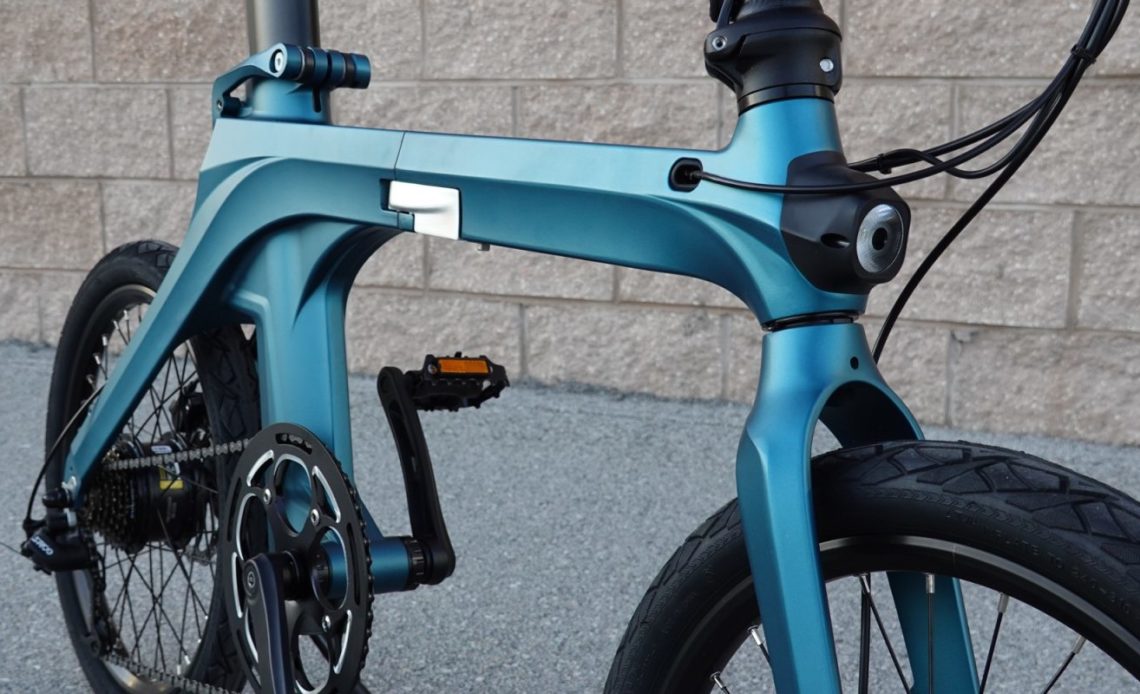 The Fiido X folding electric bike is the latest rendition of Fiido’s modern take on the classic folding bicycle. Not only are these electric bikes easier than ever to ride, thanks to their pedal assist feature, but now they come with fancy new tech for locking that innovative seat tube battery.

The Fiido X was originally released as part of a crowdfunding campaign earlier this year. But for those that didn’t want to take a risk on an Indiegogo project, now is your chance to snag a full-production model. And to let you know if it’s worth it or not, I put my body on the line to test this newfangled e-bike with the fanciest, most complicated battery locking mechanism I’ve seen yet.

The Fiido X is definitely one of the most innovative folding e-bikes out there. You’ve got to see this one in action. Take a closer look at the bike in my video review below.

What makes the Fiido X different?

There are a pile of unique features here. The magnesium frame keeps the bike relatively lightweight (for an e-bike) at just 17 kg (37 lb).

The folding mechanisms have been reworked with a sleek center folding system that hides away most of the hinge and streamlines the handle.

And the battery is built into the seat to remove any bulky frame members or bolt-on batteries that would otherwise ruin the sleek lines of the modern-looking e-bike.

The few other seat tube e-bikes out there, including the previous version of Fiido’s folding e-bike known as the Fiido D11, require an electrical cord to be plugged or unplugged each time you insert or remove the battery. That’s how you get that stored power from the seat tube battery into the bike.

But with the Fiido X, they designed this innovative rail system that shoves electrical blades into the battery’s hidden rails, engaging the battery. Making it even cooler is that the rails are engaged simply by locking the seat tube in place with the quick release lever. That means when you insert the seat, the same action that locks the seat at your desired height also invisibly performs the electrical connection to the battery.

With non-locking seat tube batteries, you have to bring the seat with you each time you park to prevent someone from stealing it. But the Fiido X incorporates a digital lock into the bike that keeps unauthorized hands off your expensive battery.

The same locking combination is used to start the bike as well, meaning the bike can only be powered on by the owner (or a friend of the owner that is privy to the combination).

The seat tube battery is without a doubt the standout feature in the Fiido X, and its 418 Wh of capacity is much larger than you might expect to be crammed into such a small space.

Ok, fine – that might actually be possible if you leave it in pedal assist level 1. A lot of e-bike manufacturers are programming their lowest assist level to be super weak in order to barely sip the battery. That means you can get extreme ranges out of the bike. But most people are likely to use levels 2 or 3 that provide more power, especially since the bike doesn’t have a throttle.

What the bike does offer, though, is a torque sensor, which works really nicely. As soon as I step on the pedal with any decent amount of pressure, I nearly instantly feel the motor assist start up. There isn’t the telltale delay found in cadence sensors.

Torque sensors are the best way to engage pedal assist because they result in the most natural assistance. The bike powers up when your legs power up and the bike throttles back when your legs ease up on the pedaling. It just works the way you’d intuitively expect it to. Fiido definitely hit the nail on the head in that regard.

The bike isn’t particularly fast, mind you. In the US it’s a class 1 e-bike, meaning you can get up to 20 mph or 15.5 km/h. That’s a decent commuter speed for the bike lane, but you won’t be keeping up with traffic in most cities. The European version of the bike is even slower at 15 mph or 25 km/h. That’s way too slow if you ask me, but then again, it’s the legal limit over there, so what can you do? Plus this tiny little 250 watt motor in the rear wheel isn’t exactly spec’d for high speed riding either, so you’re pretty much maxing out the bike when flying at top speed. If it makes you feel any better, the motor is rated at 350 watt peak power, so it is technically more powerful than the smallest 250W motors.

Like any good folding e-bike, the Fiido X is simple to fold and fairly easy to carry due to the lower than typical weight of 17 kg (37 lb). The front folding mechanism appears to be from bike maker Dahon (which I deduced from the “Dahon” printed inside it). The rear mechanism might be Fiido’s own design, which would make sense as it looks very custom-made for the novel frame of the Fiido X. It’s easy to use and looks like it’s just part of the frame when you’re not operating it. In my opinion, it looks much nicer than the chunky handles found on most folders.

Other commuter accoutrements round out the bike nicely, like the narrow CST tires, integrated lighting, hydraulic disc brakes and basic but acceptable display. Some fenders would be nice for rainy areas, but you can likely add your own fenders to the mounting points if you really need them.

For the current price of $1,599 (or $1,579 with coupon code ELECTREK), it’s a neat e-bike. It was an even better deal at $1,099 during the Indiegogo campaign earlier this year, but that’s what you get for not risking it with a pre-order.

While some might pan the lack of low-end power, the bike is obviously designed for those that are already pedal-centric. This isn’t a mini motorbike, it’s a traditional pedal assist e-bike.

There are cheaper, faster e-bikes out there with more power, but that’s not what everyone’s looking for. Sometimes a clean, lightweight folding e-bike with modest power is a better match for a true commuter e-bike.

Some suspension might be desirable for those with pampered behinds, though classic bike commuters will often trade suspension for longer lasting, lower-weight parts anyways.

So for a lightweight and interesting-looking e-bike, the Fiido X lands on a number of levels. It’s got innovative technology, a solid pedal assist system, and plenty of battery for any reasonable commute. Not bad, Fiido!