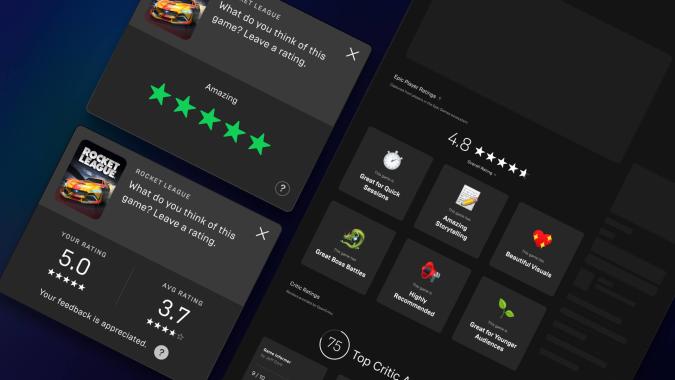 Epic Games has added a long-awaited feature to its store: user ratings. The company says that only those who have played a game for at least two hours will be able to rate it on a five-star scale. Not everyone will be able to rate a game either. Epic will randomly offer players the chance to score a game after they finish a play session. The company believes this approach will prevent review bombing and make sure ratings are from people who are actually playing the games.

An overall rating will be calculated based on players’ scores and this will appear on a title’s Epic Games Store page. The aim, of course, is to help users figure out whether a game’s worth playing. Store pages already featured critics’ reviews to help folks make a decision about whether to buy or download something.

Epic says it likely won’t ask for ratings on every game or app and the randomization approach will help it avoid spamming players. That seems like a good call. It’s a little annoying, for instance, that Microsoft asks for feedback after every Xbox Cloud Gaming session.

In addition, Epic may ask you to answer a poll after a game session. There’s a broad range of questions, including the likes of whether a game is better to play with a team or how challenging the combat is.

Epic will use data from polls to create tags for store pages. Eventually, tags will be used on category pages and to create tag-based categories for the home page. The idea is to improve discoverability and help people gain a better understanding of what to expect from a game.

Epic has broader ambitions for cross-play support beyond Steam. It’s working to support other PC launchers, as well as macOS and Linux. It will add cross-play tools for consoles and mobile to the SDK further down the line. Several of Epic’s own games — including Fortnite, Rocket League and Fall Guys: Ultimate Knockout — have full cross-play support.