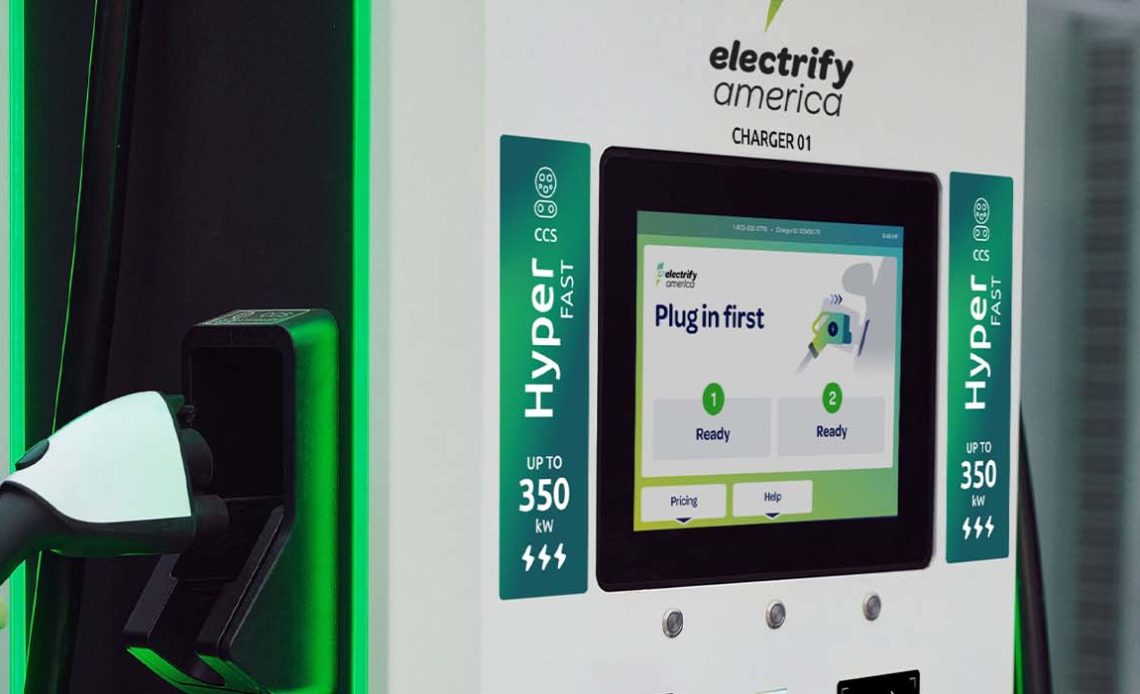 North American EV fast-charging network Electrify America has introduced a new labeling system to more easily differentiate its charging levels for consumers. Additionally, the latest generation of Electrify America DC fast chargers will include a new “Balanced” technology in which power is evenly distributed to multiple EVs at once in order to maximize speeds and deliver at least 150 kW of “ultra-fast” charging. Could this set a new standard for all EV charging networks in North America?

Electrify America currently operates one of the largest DC fast-charger networks in the United States, consisting of roughly 800 charging stations that contain about 3,500 individual EV chargers. Looking forward, the company has already shared plans to expand in the United States and Canada by 2026, growing it to roughly 10,000 chargers across 1,800 different stations.

Unlike many other competitors, Electrify America has kept a keen focus on delivering as much power as possible, offering at minimum 150 kW, but power as high 350 kW. Up until this point, the term “ultra-fast” has been generally used to represent any and all direct current (DC) charge rates, particularly those above 50 kW. Anything in between has sat under the all-encompassing term of “DC fast charging.”

As charging networks from several different companies across North America continue to expand to keep up with the booming rate of EV adoption, faster charging speeds are not only becoming more common, but more so a requirement in the eyes of consumers.

Many EV drivers – particularly those new to charging or, at the very least, new to Electrify America – might be confused by the varying power levels and what charger rates their particular vehicle is equipped to handle.

To settle this, Electrify America has introduced a new naming system to differentiate its charging power levels. Furthermore, this new branding is backed by intuitive technology that will not only make the charging experience easier to understand for drivers, but should also maximize their precious time spent replenishing at a fast charger.

Electrify America’s new chargers are redesigned inside and out

If you own an EV, you’ve probably heard the term “Ultra-fast” charging before. It’s a term Electrify America has been using to describe its network of DC fast chargers for years, and has become a preferred term to describe power levels of 150 kW and above.

Some of the success of this nomenclature could be attributed to US legislation using it while setting federal EV charging standards in programs like the National Electric Vehicle Infrastructure (NEVI) Formula under the Bipartisan Infrastructure Law (BIL) signed in early 2021.

To avoid any further confusion on what constitutes “Ultra-fast” charging and what lies beyond those speeds, Electrify America is introducing a new naming system that is much easier to understand. Its network of chargers will be labeled with two different power names, complete with easy-to-read icons and differentiating color schemes:

In an interview with Electrek, Robert Barrosa senior director of sales, business development, and marketing at Electrify America and Electrify Canada, explained that the revised system of icons and terminology was developed based on the charging network’s own user research and input from current customers. Barrosa elaborated:

We want to help make the transition to EV charging easier by translating kilowatt ratings into simpler names like Hyper-Fast and Ultra-Fast with corresponding colors to help them make a selection at the charger. As EV sales continue to grow, it’s important that we continue to educate everyone on how easy public charging can be, ensuring consumer comfort with making the switch. It should not require a calculator to figure out what charger’s power output may best match the capabilities of their EV.

In addition to easier-to-read and understand visuals on its chargers, Electrify America shared additional tools that will soon be at drivers’ disposal. Chargers will be equipped with clearer NFC labeling so that Electrify America members know exactly where to tap their smartphone to initiate payment.

EA has also begun repositioning each charger’s ID number to the middle of the pile closer to eye level, so those customers who require it for swipe-to-start charging can do so quicker and with less confusion.

Lastly, Electrify America has added a prominent QR code to its chargers that customers can easily scan to receive simple step-by-step instructions on how to charge, troubleshoot, and obtain cost information.

Lastly, and possibly most importantly, Electrify America is rolling out a new generation of Hyper-fast EV chargers that will offer Balanced charging. Each EA pile consists of two chargers sharing one power cabinet, allowing two separate EVs to charge simultaneously.

Electrify America explains that thanks to new software technology within its Balanced chargers, the system can monitor each EV’s charging capabilities and current energy demand, then relay that data back to the shared power cabinet. In turn, the cabinet uses sensor/meter data to evenly allocate power between both EVs as the demand of each fluctuates.

150 kW is the standard power level for Balanced charging, but since each charger will be able to deliver up to 350 kW, there’s room for another EV to gather at least the same amount of power, if not more. For example, if one EV plugs into a Balanced EA charger and can only handle power up to 150 kW, that’s the rate it’s going to get.

However, if another EV pulls up to the same shared pile, say it’s a Rivian R1T with a platform capable of receiving power up to 200 kW, it can still get a decent charge. It may not be the full 200 kW, but since it can handle that much power, there will be 200 kW available, despite the 150 kW already being distributed to the first EV.

As the demand from the 150 kW EV decreases, the newly available power will be fed to the Rivian, as long as its platform is capable of receiving higher power levels. During our chat, Barrosa also told us that customers can register their EV in the Electrify America app, and based on the EV’s charging capabilities, EA can suggest certain chargers for drivers.

For example, if you’re driving an EV capable of 350 kW charging and there’s a Balanced charger with an EV using one side already, but there’s another one wide open, it will direct you to the open one so you can utilize the full 350 kW instead of having to share.

Electrify America shared that newly installed 350 kW Electrify America chargers will feature visible “Balanced” designations, in addition to the new labeling for Hyper-fast charging. The network also points out that some existing chargers, especially those on highways, will continue to offer dedicated 350 kW power to support drivers with EVs capable of those high charging speeds.