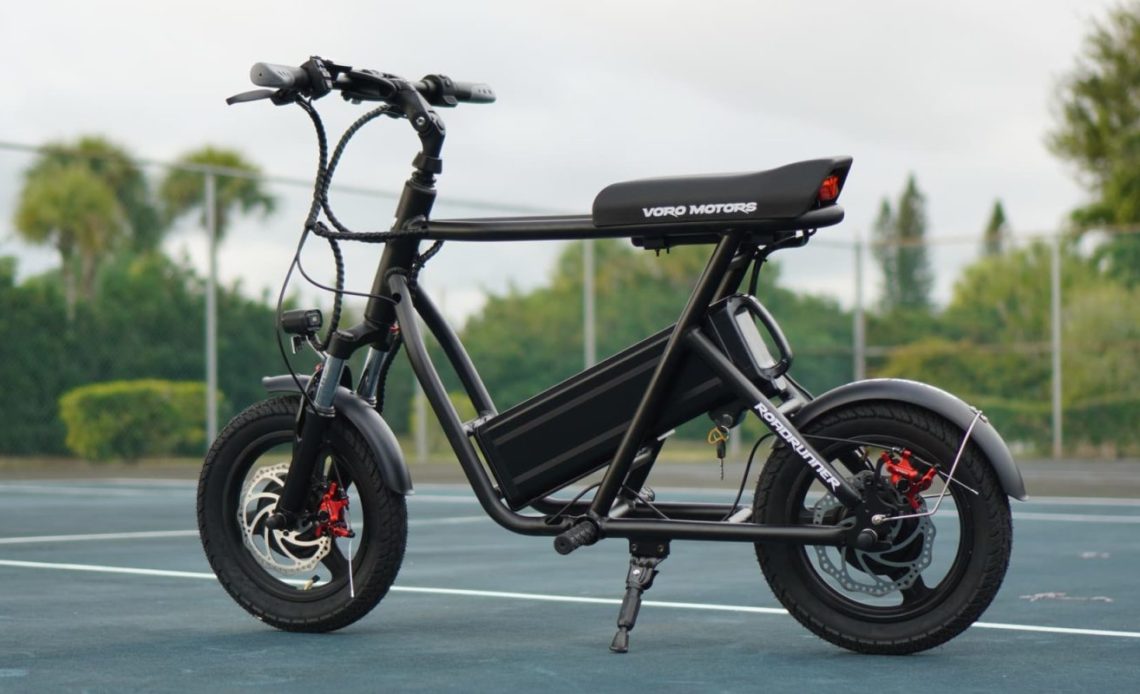 Ever heard of an electric micro-bike? That’s okay, not many have. It’s a fairly new (and largely undefined) class of micromobility vehicles, but one that is growing thanks to several interesting new additions to the market.

While technically not really “bikes” at all in the traditional sense due to a lack of functional pedals, electric micro-bikes offer a similar style of seated ride to a conventional e-bike, yet are usually smaller and lighter for added convenience.

That convenience is key, since the most common use case for electric micro-bikes is a short-range city commuter vehicle.

It’s a similar type of use as folding electric bikes, yet without the added complexities of pedal drivetrains.

Take for example the JackRabbit 2.0. This humorous-looking mashup of an e-bike and an e-scooter rolls on 20″ wheels that look like they could have come off a folding bike or a BMX. But the size and minimalist design bring the weight in at just 23 lb. (10.5 kg).

Despite the small size, it can still reach a top speed of 20 mph (32 km/h), making it just as fast as any other Class 2 e-bike in the US. There aren’t any pedals and so you’ll be using purely throttle to get around, but that’s part of the charm of this quirky little electric vehicle. And considering the, it’s a much cheaper electric vehicle than anything you’ll find on a car lot!

We had a chance to test out the JackRabbit earlier this year and found it to be an awesome little commuter vehicle, as long as your commute is under 10 miles (16 km). Spoiler alert: Most purely urban commutes are well under 10 miles.

While the JackRabbit offers a bolt-on rear rack to add to its utility, some electric microbikes have designed utility right into the frame.

Take the Fiido seated scooter, for instance. The design uses a double wishbone-style frame that is rarely seen on e-bikes or e-scooters, creating a hollow section in the middle of the frame.

Since the battery is housed under the seat, the entire middle section of the frame becomes one big basket. The company even provides a fabric bag that fills the space and ensures you don’t lose any small items along the way. As if that wasn’t enough, there’s even a seat pad that can turn the scooter into a kid carrier too, though there aren’t any foot pegs for the little one’s feet so he or she will have to get creative.

This model also offers front and rear suspension, which you don’t normally find on these minimalist micro e-bikes – especially not for the low $899 price.

This is another one that we had the chance to test out, and it’s a hoot to ride. It doesn’t quite feel like an e-bike or an e-scooter, but rather something in between.

Established low-cost brands like Jetson have also been dipping their foot into the electric micro-bike field for some time now.

The Jetson Bolt is the epitome of a simple, easy-to-use electric micro-bike. Everything is hidden away inside a plastic shroud in the center of the frame, giving the little scooter a clean appearance.

The small foot pegs don’t take up much space when parked but still give plenty of room for the rider’s feet.

A lower top speed matches the Fiido model above at just 15 mph (25 km/h), but the small wheels don’t lend themselves to super fast speeds anyway. Having tested this one myself, I can confirm that 15 mph feels fast enough for such a small model like this.

, this is a steal for someone looking at a super simple, small, and foldable electric micro-bike or seated electric scooter.

With two motors offering all-wheel drive and a fast top speed of around 35 mph (56 km/h), the EMove RoadRunner is one of the most extreme electric micro-bikes on the market.

It is built around a huge 48V and 26Ah battery offering 1,250 Wh of capacity, or around 50 miles (80 km) of range if ridden in a more modest power mode. But with this much power and speed, most riders will be tempted to keep it going faster.

There’s front suspension to help manage minor bumps, but the lack of rear suspension means you won’t want to hit any major obstacles at full speed. That padded seat will still launch you upward if hitting a big enough bump at wide-open throttle.

Priced at $1,795, this is one of the more expensive electric micro-bikes on the market but also one of the most capable. Considering you get what you pay for, you certainly get a lot with this wild ride.

As this style of minimalist electric vehicle continues to grow in popularity, more offerings are sure to hit the market.

Could you see yourself on an electric micro-bike? Or do you need the confidence of knowing you have pedals as a backup? Or perhaps you just prefer standing like on a scooter? Let’s hear your thoughts in the comments section below.