You’re reading 9to5Google — experts who break news about Google and its surrounding ecosystem, day after day. Be sure to check out our homepage for all the latest news, and follow 9to5Google on Twitter, Facebook, and LinkedIn to stay in the loop. Don’t know where to start? Check out our exclusive stories, reviews, how-tos, and subscribe to our YouTube channel.

Last month, Google unveiled plans to bring RCS to all Android phones in the United States, scheduled to roll out over the following weeks. Today, a new update to Carrier Services seems to immediately enable RCS on some Android devices, including Google Pixel phones.

Google’s ambitions with the Chat initiative for RCS to replace SMS around the world have been stymied by carriers both in the United States and abroad. Those carriers have been unwilling to put the effort into the new technology in a reasonable amount of time.

Starting with the UK and France, Google bypassed the carriers and brought RCS messaging to Android phones through the Google messages app. Not long after, Google formalized their plan to bypass United States mobile carriers in the same way, with the roll out to occur over the coming weeks.

This afternoon, an update arrived for the carrier services app, bringing it up to version 32.0.283645144. In our testing on multiple Google Pixel devices, installing this update immediately triggers the availability of RCS messaging via the Google Messages app.

Once RCS messaging becomes available, you’ll be greeted by a prompt the next time you open Google Messages, letting you know “Messages just got better” and inviting you to try out the chat features. 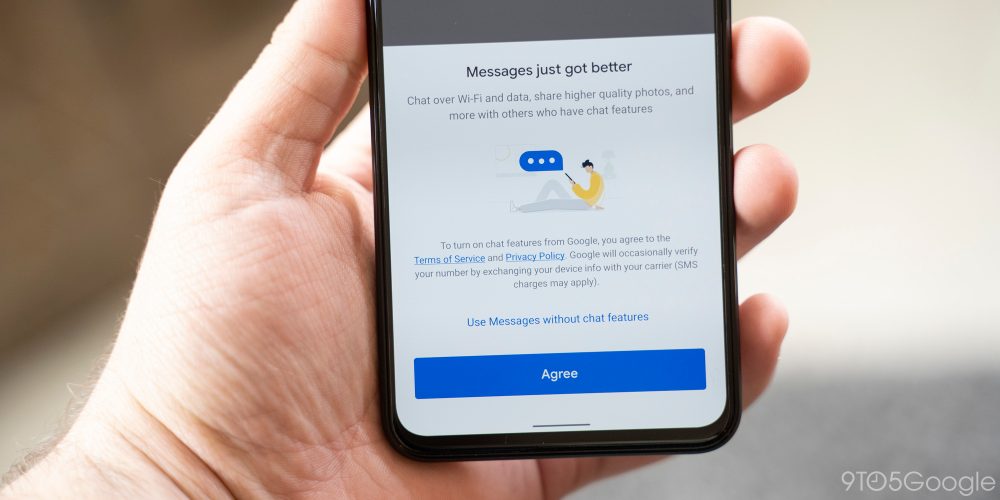 Once you and your conversation partner have RCS chat features enabled, your previously SMS-only conversation will be upgraded with new features like larger image sizes, typing indicators, and read receipts.

Carrier Services 32.0.283645144 is rolling out now via the Google Play Store. Let us know in the comments what device you’re using and whether the Carrier Services update brings RCS to your phone.