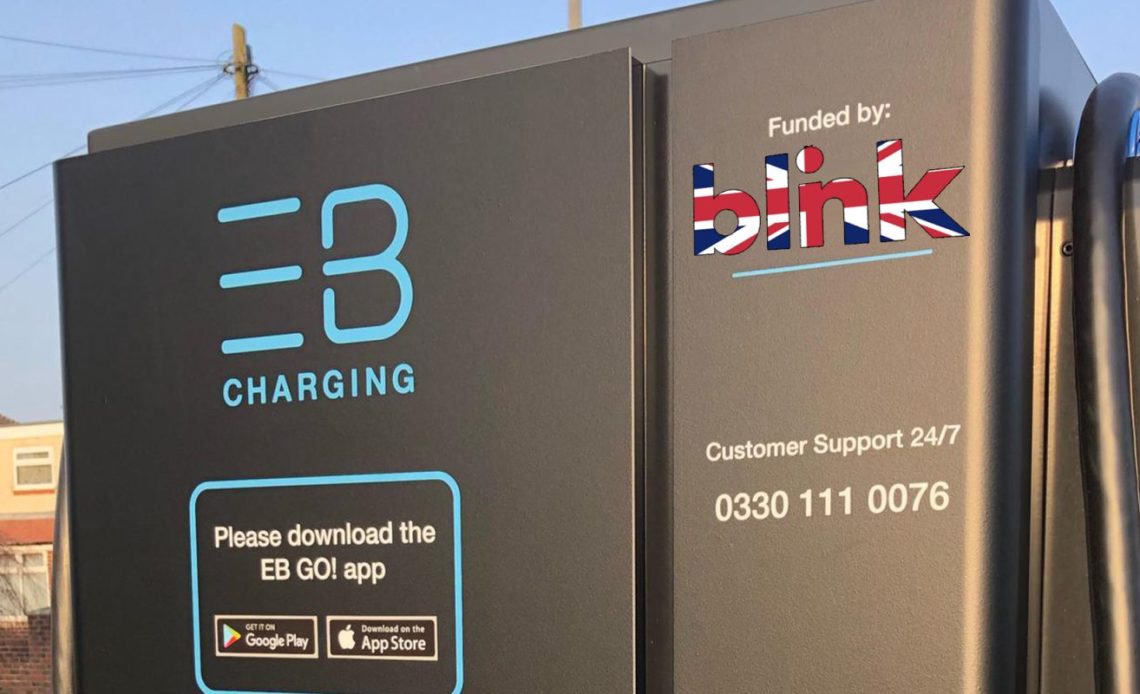 Blink Charging announced that its European subsidiary, Blink Holdings BV, has acquired Electric Blue Ltd. better known as EB Charging based in the UK. In addition to Blink’s first entry into the UK, the acquisition marks Blink’s global expansion which now includes over eighteen countries.

Blink Charging Co. ($BLNK) is an EV charging network operating over 30,000 ports across the globe. In addition to charging hardware and services, Blink’s network uses proprietary, cloud-based software that operates and tracks connected charging stations and gathers the charging data each provides.

Blink kicked off 2022 with a slew of new charging products unveiled at CES in Las Vegas, including an HQ 200 home charger, MQ 200 fleet charger, and a “Vision” version of its IQ 200 charger, complete with two 30″ LCD screens.

Soon thereafter, Blink announced plans to deploy thousands of IQ 200s to the front and back of house at GM dealerships across the US and Canada. In addition to those countries and several more in North America, Blink has expanded to South American countries like Colombia, Chile, and Aruba.

In Europe, Blink has established a charging presence in Greece, but it can now add members of the UK to its network list thanks to its latest acquisition.

Blink acquires over 1,150 EV chargers in UK from EB Charging

According to a press release from Blink, it purchased the UK charging network for roughly $23.4 million which includes a combination of cash, stock, and earn out. Having been founded in 2015, EB Charging has a footprint of Level 2 and DC fast chargers across 40 municipalities in the UK.

Last month, the UK committed to increase the number of charge points to 300,000 by 2030 as part of a new £1.6 billion ($2.02 billion) strategy to harden public EV infrastructure. By acquiring EB Charging, Blink looks to both contribute and cash in on this strategy. Blink founder and CEO Michael Farkas spoke:

Blink and EB Charging have a shared mission to advance EV charging through strategic owner-operator models that provide for greater flexibility and better outcomes. With the recent government incentives, EB Charging is the ideal business to integrate into the Blink umbrella. We’re excited to have a significant presence in an important market through this acquisition and play an integral role in helping the UK to achieve its electrification goals,

As part of the acquisition, EB Charging will continue under its current brand and further its existing strategy, but at a significantly increased pace. According to Blink’s CEO, it will expand EB Charging’s product offerings in the UK as well. This will include commercial and home chargers, global network services and apps, and new EV fleet management tools.

Combined with a network presence in Greece, Blink’s entry into the UK appears to be the start of further expansion throughout Europe. Miko de Haan, Managing Director of Europe at Blink Charging shared a similar sentiment:

The UK has continued to demonstrate global leadership in accelerating the transition to EVs and EB Charging is an evident example of this. With clear alignment of values and innovation, our agreement to acquire EB Charging will allow us to deliver first-class charging solutions to drivers and partners across the UK, while driving forward our expansion across Europe.