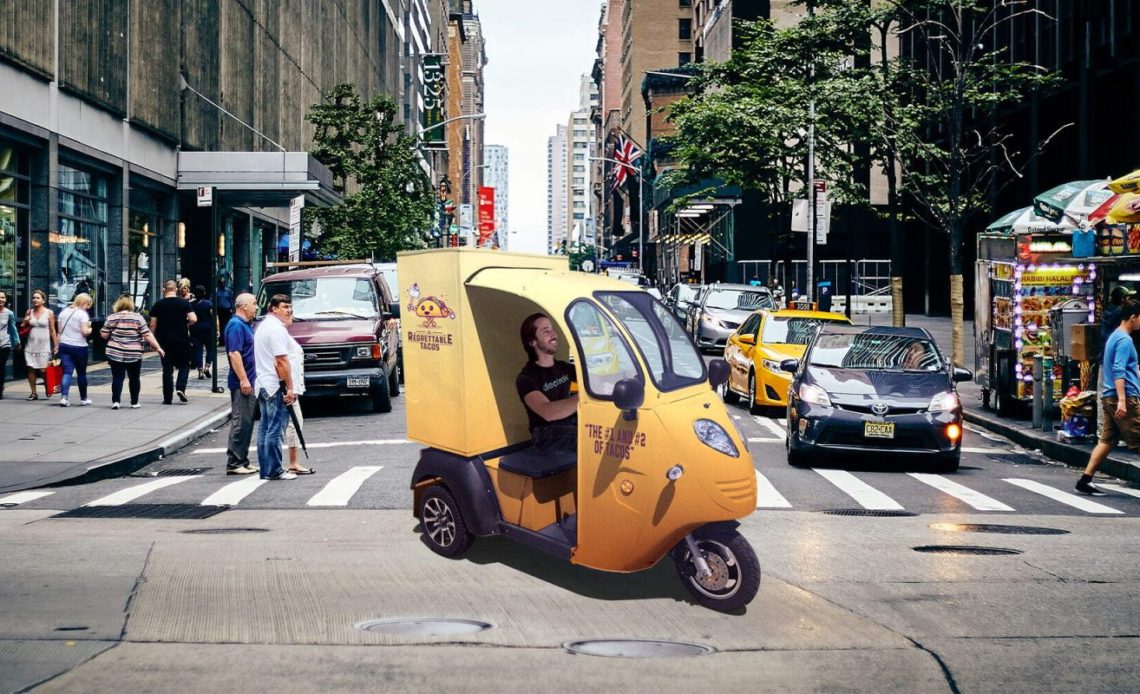 One of the coolest things about the funky electric vehicles sprinkled around China’s largest online shopping platform is their small size. They often look like they were inspired by full-size vehicles, but then somehow shrunk in the wash. Though this week’s entry in the Awesomely Weird Alibaba Electric Vehicle of the Week column looks like it might have partially melted in the wash too.

That’s a win for us though, since now it gets to become the world’s smallest taco truck!

Whatever you call it, this three-wheeled electric cargo vehicle is perfectly sized to become the most adorable little taco truck ever.

Why stand in a long line at a conventional taco truck, inhaling the potpourri of chili powder and diesel fumes while waiting for your lunch? You’ve already made one poor decision that you’ll pay for in several hours, why make two?

Instead, just order from my new totally real and not at all fictional business that I just dreamed up, Regrettable Tacos, and get your meal delivered right to you!

I’ll be slicing through the city traffic in no time with my narrow little taco truck.

It’s not powerful, but it sure has heart! The small motor only boasts 800 watts, yet each and every one of them is dedicated to getting you the Mexican spread you ordered in as little time as possible.

Even though I’ll be limited to my mere 28 mph (45 km/h) of maximum speed, I’ll keep the pedal down the entire way. Or rather, I’ll keep a full twist of the wrist, as this thing has motorcycle handlebars and throttle control instead of a typical steering wheel and pedals.

And it’s even got enough range to go all day thanks to a 4,176 Wh battery pack. It’s a lead acid battery bank, which isn’t exactly top of the line. But I could always replace that with some cheap swap-in lithium iron phosphate batteries once I get it stateside.

The vendor says that the battery pack is enough for 100 km of range, or 62 miles in freedom digits for the Americans out there. I don’t think I’d need to go farther than that per day, that’s a lot of tacos. But just in case, I could always slap a solar panel on top of the truck to squeeze in a few more taco runs each day.

The truck is incredibly affordable at just $2,000 (and I seem to remember another popular $2,000 Chinese truck recently). But despite the cheap price, this isn’t some cheap truck.

This little runabout is so well made that it comes full of important features and high-quality accents.

It’s got aluminum rims, a front disc brake, side glass windows that are somehow nearly bigger than the windshield, a giant storage box in back, a tiny storage box in front, and something called “rainproof rubber.”

I don’t know what rainproof rubber is, but I’m all for it if it keeps your tacos dry. Look, they’ll be getting wet eventually, but at least they can be dry on the way in.

And look, I know what you’re thinking. “Sure Micah, you’ve got a nice looking taco truck there. You’re also a handsome gentleman and the fact that you haven’t won a Pulitzer Prize yet is no reflection upon you, rather it is an embarrassment for Columbia University’s selection process. But what happens when you have to drive that taco truck over a modest hill?”

I totally understand your sentiments and I’m right there with you. But the vendor seemed to agree with us on all accounts as well, as he provided a nice little video of our soon-to-be taco truck scaling what can only be described as a standard issue ramp.

And it seems to handle it just fine!

So buckle up, boys and girls! If I get enough tamale orders, I just may need a fleet of these little things all over the city.

Now who wants to be one of my drivers?!