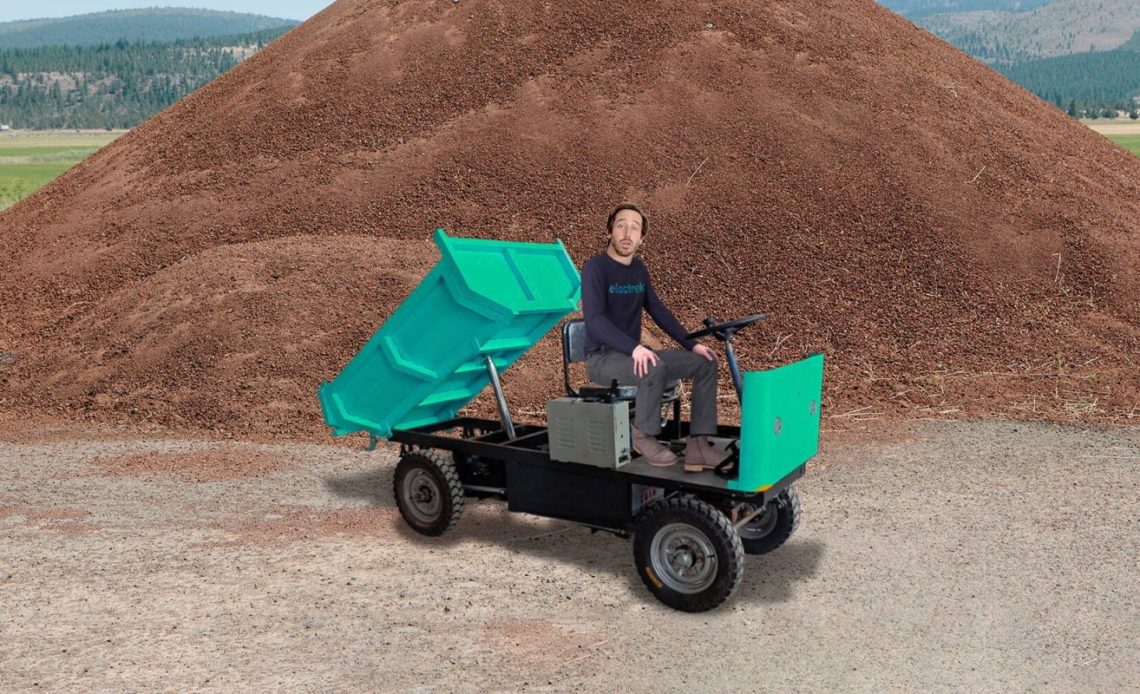 I’ll be honest, I’m not quite sure how to describe this thing. If a ride-on lawnmower and a dump truck made an illegitimate child in an electrical storm, this would probably be it. The quirky vehicle has the maneuverability of a shopping cart mixed with the utility of a wheelbarrow.

It’s everything I could ever want in a one-seater electric dump truck, especially since I didn’t know the category even existed until I stumbled upon this little wonder-trucklet. But now that it’s raised its dumpy head above the tall grass and peaked at the great big world out yonder, it has officially won the dubious honor of becoming this week’s Awesomely Weird Alibaba Electric Vehicle of the Week.

Even though this fella may be small, I think it’s full of heart.

The little dump truck (dump cart?) measures just 2.85 meters long, or a solid 9 feet. But as the ol’ refrain goes: It’s not the size that matters, but how you use it.

And with a 1-ton capacity, you could get some serious use out of this little guy – even if it would require a serious heaping of self confidence to roll up in front of your friends at the worksite on this buggy.

There’s 420 liters (15 cubic feet) of space back there for hauling a literal ton of whatever you can fit in it. Sure, that’s slightly less cargo space than the frunk of a Tesla Model 3. But does your frunk come with a hydraulic dump feature?

*crosses arms* Then I rest my case.

I’ve got a sneaky suspicion the committee designing this thing asked how big to make the pump motor and someone responded, “I dunno, probably should be bigger than the drive motor.”

Either way you slice it, neither is a very big motor but they’re probably appropriate for the job at hand. The little truck only gets up to a max speed of 20 km/h (12 mph), so it’s not going anywhere quickly.

And considering that’s almost certainly the speed when empty, I shudder to think how fast this thing crawls with a couple thousand pounds of rocks back there.

You can’t accuse the manufacturer of skimping out on the features though. Just look at all you get! There’s a padded chair that looks like it was lifted from a church youth group, four pneumatic tires so narrow you could clean them in the lower dishwasher rack, and a front fascia that I’m pretty sure I once sketched out in kindergarten.

Also, the fact that the sales page has exactly zero pictures of the dump bed in the down position has me starting to wonder if it just got stuck that way and they decided to run with it.

I know I’ve given this little dumper a hard time, but I think it also has to be viewed in context with its price. For just $1,700 (or $1,400 if you buy a set of 10!), this is actually starting to look like a deal. You can barely buy a mid-drive electric bike for that price in the US, much less a 1-ton capacity electric dump truck.

Oh, and if you’re almost sold on this thing but have been holding back because it just seemed too darn stable and balanced for you, then I have good news: There’s a tricycle version, too!

If you ask me, I think I’ll stick with my own dumping electric mini truck that I bought from Alibaba last summer.

I’m not sure it could handle 1 ton of lift capacity like this thing claims, though I’ve had around 700 or 800 pounds of dirt in the back without a problem.

Check out the clip below to see me making a massive dump in the backyard.