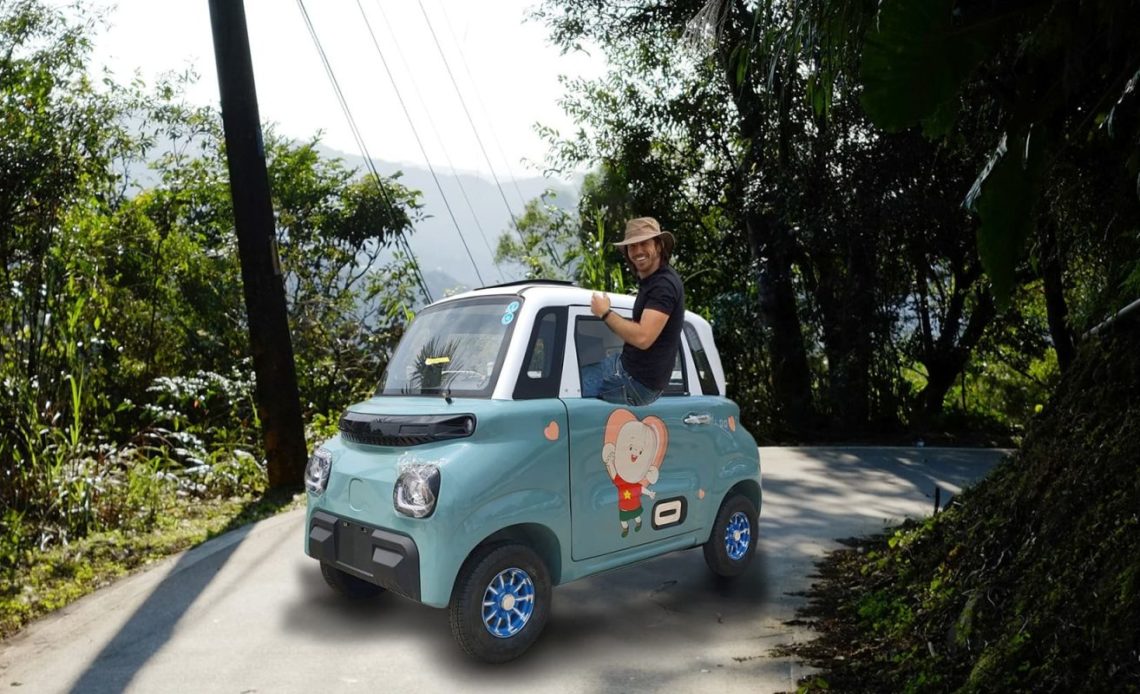 Well this is a new level of weird, even for the Awesomely Weird Alibaba Electric Vehicle of the Week series. Because even though we’ve covered some oddball designs from China’s largest shopping site, we could always at least tell which end of the car was the front. But this time, it’s not nearly so clear.

And that appears to be by design, which is perfect for me. One feature I always look for in a car is difficulty in determining which end is the front.

[Update August 6: Turns out I don’t know my French EVs well enough, because this thing is a ripoff of the Citroen Ami.]

This funny-looking electric car is nearly symmetrical from the front to the back.

That probably doesn’t lead to the best aerodynamic performance. But the top speed of 60 km/h (37 mph) and a little 2.2 kW (3 hp) motor means that aerodynamics also aren’t exactly critical.

What was apparently more critical to the designers was that any driver would have to walk around the car once or twice before figuring out which side to get in; that’s because there’s basically nothing to clue you in on which end of the car is the front and which is the rear.

The odd little car is a four seater, and fortunately all four seats face forwards. So between the color of the tail lights and the direction of the seats, you’ve got some subtle hints on which tip of the car to point at the end of the driveway.

There’s a two door coupe and four door version, but both are equally confusing. The two door has a conventional door on the driver’s side (left or correct side) and a suicide door on the right side. With the passenger door opening backwards, the car creates a funky look, especially from the top. I’ve never seen a more Yin and Yang car in my life. The four door version has two normal front doors, while the rear doors are rearward-opening suicide doors. So again, we’ve got symmetry right down the middle of the car.

Check it out in the video below.

To be fair, the interior actually looks quite nice. I’d say it’s nicer-looking than the interior of a $2,264 car deserves to be!

And at that price, I’ve got half a mind to snatch this thing up and put it on the next slow boat from Shanghai; of course, the other half of my mind is thinking exactly the opposite. Damn, this Yin-Yang thing is rough.

It wouldn’t be the first weird mini electric vehicle I’ve bought from China, but it certainly wouldn’t have the utility of my past purchases.

I’m not telling anyone to get this thing, but I am saying that if you do, please invite me to the unboxing ceremony!

And let’s just hope they put an arrow on the box labeling it. I’ve never seen an Alibaba product more worthy of a “This end forwards” sticker in my life.