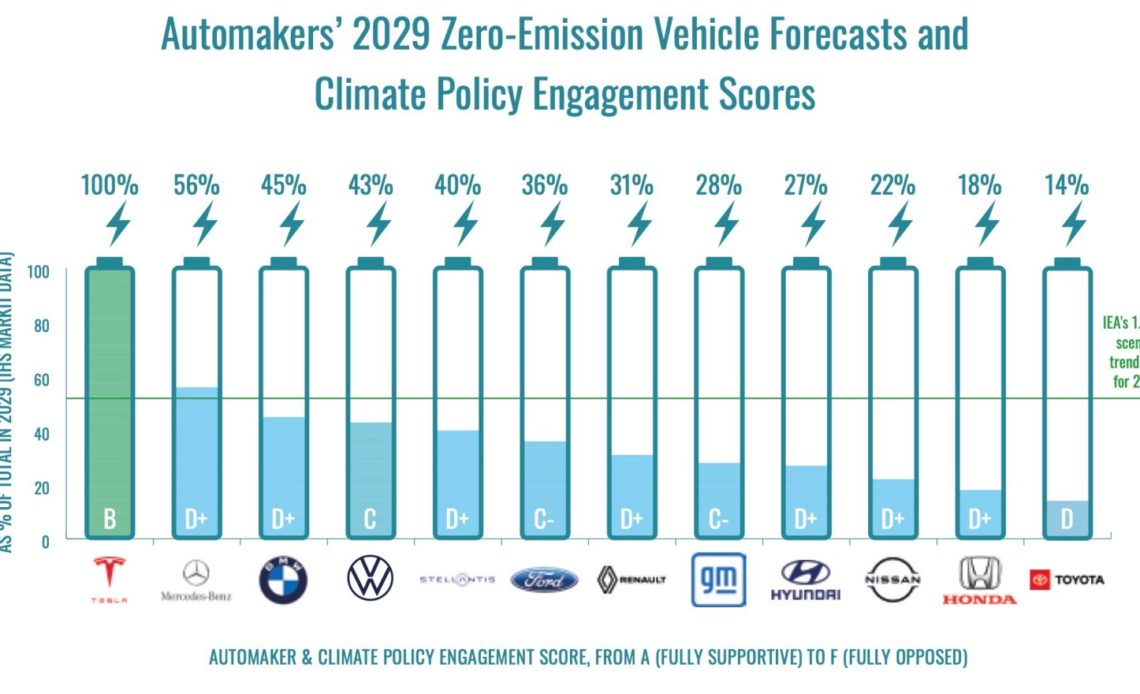 Major automakers are currently on track to fail to meet necessary climate goals to keep the world under 1.5 degrees Celsius of warming, according to a new report by InfluenceMap.

The report showed that while companies are largely making climate-forward public statements, these statements do not match up with their actions in terms of future production plans or their lobbying efforts.

The report compared production forecasts to the International Energy Agency’s 2050 road map, which detailed that 57.5% of light-duty vehicle sales must be zero-emission by 2030. The report focused on 2029 model year vehicles, as that is the last year before the 2030 timeline.

Unsurprisingly, Japanese automakers lag behind the rest, occupying the bottom 3 positions on the table. Nissan is slightly better than Honda and Toyota in this respect but still lags behind all non-Japanese automakers. However, the report, which used data ending March 2022, did not account for Honda’s April announcement of increased EV investment, which could improve its position.

The report noted that most companies tend to embrace and advocate for better climate policy in direct proportion to their future EV production goals, but that a few companies are outliers to this trend. BMW, Stellantis, and Mercedes have all set relatively high targets (but not high enough, except Mercedes) for future production, but their engagement with lobbying efforts has largely been against climate action.

While US automakers are currently doing better in policy advocacy than most others (in a break from the past), US policy is nowhere near what’s required to meet climate targets. As a result, automakers who sell in the US have significantly lower sales targets in the US than elsewhere. For example, Toyota plans 49% BEVs in the EU by 2029, but only 3% in the US. US EV production percentage is projected to be lower than Chinese and EU EV production in 2029.

Automotive industry lobbying groups are further pushing against climate action, and the companies examined (except Tesla) all belong to and actively engage with at least one lobbying group that is actively fighting against regulations on polluting vehicles (represented by each company’s “relationship score”).

Even Tesla had a little room for improvement, earning a “B” for their lobbying efforts. This was largely down to their relative lack of “engagement intensity” on policy issues – while the company does generally lobby in the right direction, there are other companies that lobby significantly harder and more effectively than Tesla does. Regardless, Tesla still stood out from the pack as far and above the best example of an automaker covered by the report (their CEO – who recently called for climate-harming increases in oil drilling – notwithstanding).

The situation is even worse outside of the major markets of the EU, China, and the US, where automakers have single-digit-percentage EV plans and expect to offload their polluting gas vehicles onto the populations that are generally the most negatively affected by global pollution.

SUV production was found to be a major threat across the industry to decarbonization. Production forecasts show that SUVs will rise from 39% to 47% of light-duty vehicles with all automakers planning to increase SUV production, increasing emissions from light-duty vehicles and eating away at some of the improvements from gradual electrification of the vehicle fleet. SUVs have been the second largest cause of emissions increases globally over the last decade.

Automotive industry lobbying has improved in the last two years that InfluenceMap has looked into this, with most of the industry now earning better scores than they did in 2020. Volkswagen (or should I say Voltswagen?) has shown the most improvement, raising their score from a D- to a C, while Ford and GM have improved significantly as well. This shows that the industry can respond and still improve, but it remains to be seen if that improvement will happen fast enough. Regardless, industry lobbying activities still represent a major blockage to addressing climate change through policy.

These climate goals are necessary to avoid the worst impacts of climate change, including the possibility of positive feedback loops that will only make it harder to bring warming under control. The necessity of keeping warming below 1.5 degrees Celsius is not some political opinion but a result of the projections of thousands of scientists showing that we are at a breakpoint where we can still avoid the worst and costliest effects of climate change.

And there is no way that we can negotiate or lobby our way out of this. In this negotiation, our adversary is physics, and physics does not care about how many dealers you have to wrangle, how many engineers you have to retrain, how many battery recycling plants you need to construct, or any of the other traditional excuses the auto industry has made for their complacency. It only cares that you need to reduce carbon in the atmosphere, and it’s not going to budge or compromise, no matter how hard you lobby it or how difficult you say compliance would be.

We must keep warming underneath these target temperatures. We caused it, we are the only ones who can stop it, so we must get to work.

Simply put, automakers and governments (and consumer demand, see SUVs) must do better than what current production plans and policy indicate, lobbying against progress needs to end, and the industry must take action – today. We have to do more. End of discussion.