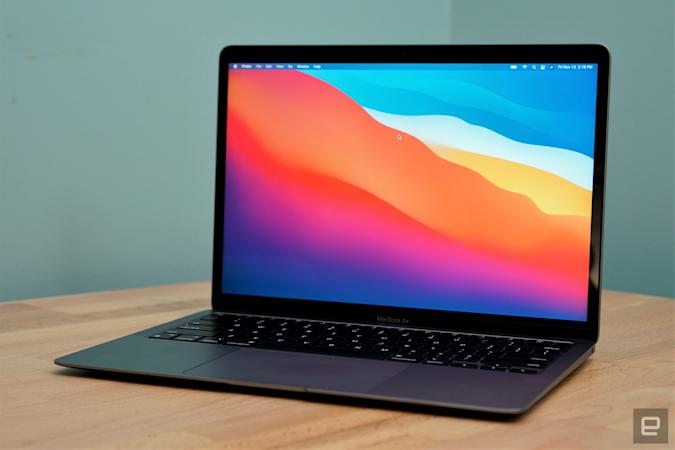 While you may waiting in anticipation for Apple’s next iteration of the MacBook Air, the current model is on sale at Amazon. You can pick up the 256GB MacBook Air M1 for $900 right now, or $100 off its normal price. We have seen it lower before — last year’s holiday shopping season brought its lowest price ever of $800 — but a $100 discount remains a good one if you’re in need of a new thin-and-light laptop.

We consider the MacBook Air M1 to be the best laptop for most people, despite it being about two years old at this point. It impressed us with its stellar performance and lack of fan noise, both of which help it feel speedier, smoother and more efficient than previous models. It also has improved GPU performance, and while it’s not a gaming machine by any means, it can handle Apple Arcade games nicely.

Performance is the standout new feature on the MacBook Air M1, but that’s only because Apple didn’t fix what wasn’t broken about the laptop’s design. It’s super thin and light, coming in at 2.8 pounds, plus it has a lovely 13-inch Retina Display, an excellent keyboard and trackpad and a battery that can last over 16 hours on a single charge. The biggest downsides come in its webcam and scant port selection. You’re only getting a 720p webcam on this laptop, which is lackluster considering how much time many of us spend on video calls every day, and the machine has only two USB-C ports on it.

If you absolutely must have more ports and don’t want to live the dongle life going forward, consider the 14-inch MacBook Pro instead. It’s more expensive, but it’ll be a better investment in the long run. However, if speed and portability are your top concerns, the MacBook Air M1 is one of the best options out there.