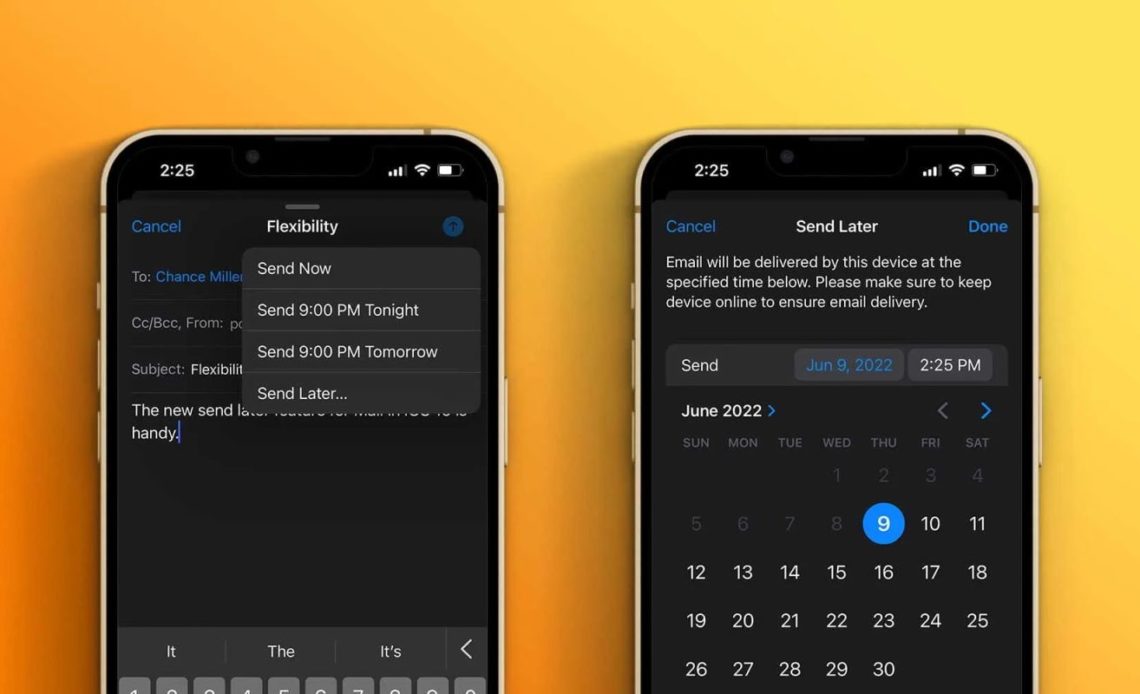 Apple @ Work is brought to you by Mosyle, the only Apple Unified Platform. Mosyle is the only solution that fully integrates 5 different applications on a single Apple-only platform, allowing Businesses and Schools to easily and automatically deploy, manage & protect all their Apple devices . Over 32,000 organizations leverage Mosyle solutions to automate the deployment,  management and security of millions of Apple devices daily. Request a FREE account today and discover how you can put your Apple fleet on auto-pilot at a price point that is hard to believe.

One of the headline features of macOS Venture and iOS 16 was a few enhancements to Apple’s Mail app. I’ve long criticized the app for some serious upgrades as stagnant and much overdue; I even argued in the past that Apple developed a Mail.app Pro and rename the current app Mail.app Lite to keep the needs of business users separate from pro users. With Apple’s fall upgrades, Scheduled Send is finally built into macOS and iOS’s Mail app, but with a caveat that IT administrators will appreciate. Continue reading to learn more about schedule email send in iOS 16 and macOS Ventura.

About Apple @ Work: Bradley Chambers managed an enterprise IT network from 2009 to 2021. Through his experience deploying and managing firewalls, switches, a mobile device management system, enterprise-grade Wi-Fi, 100s of Macs, and 100s of iPads, Bradley will highlight ways in which Apple IT managers deploy Apple devices, build networks to support them, train users, stories from the trenches of IT management, and ways Apple could improve its products for IT departments.

Scheduled Send is not a new concept for email apps – it’s a pretty standard feature today, and even Gmail has it built into its web app. macOS, and iOS email apps like Spike and Spark have offered it as an included feature for many years. Apple was one of the last holdouts on not offering scheduled send as a built-in feature.

If you’ve always stuck with Apple’s email apps to manage your inbox, you might be wondering: Why would I want to delay sending an email at a later time? I personally use it all the time. Here are some situations where I use it.

I usually spend Sunday evening prepping for the work week, but I don’t expect anyone else I work with to do so. If I send emails for actions or meetings about the upcoming week, I’ll write them on Sunday but schedule them to ship on Monday morning. This way, I don’t disturb their family time.

This example can backfire if used wrong, but if you’re organized – it works. Let’s say I send someone an email asking for something from them. I’ll often schedule a follow-up email for a week later. By doing this, I automate the follow-up process. If they respond sooner, I’ll delete the planned follow-up.

Let’s say you want to remind your team about turning in their expense reports on the last day of the month. You can write that email anytime, but have it sent at the right time. It’s a way to check something off your tasks list so you can move on to other things but have it delivered at your chosen time.

Apple is including schedule Send as part of its fall releases, but it works differently than other platforms. With other apps, your email will be held on their servers until the time of your choice; the benefit of this setup is the email is sent regardless of if your devices are online at the time. However, some users (and IT professionals) don’t like this integration as it adds another middleman to their email delivery. Email app companies integrate into the Gmail API similar to how Mail.app does, but they’re taking it a step further. Of course, you’ll want to use a company you trust, have read over the privacy policy, etc. Most popular email providers are from great companies with great people you can trust.

On the other hand, Apple is going out schedule send differently. The email is held locally on the device. If you schedule an email to be sent from Mail.app on macOS Ventura on Friday at noon, but your laptop is offline at that time, it won’t be sent until it comes back online. Depending on your use case, that might be a problem or a great feature. Scheduled emails on macOS Venture and iOS 16 don’t sync to other devices, so if you have scheduled an email on your Mac, you won’t see it on iOS. It’s truly held locally on the device. If Power Nap is enabled, I can confirm that emails scheduled in macOS Ventura will send while your Mac is asleep.

Apple’s method for scheduled email send on iOS 16, and macOS Ventura will appease security professionals as it limits where email can be stored. Still, it can cause problems for end-users if they expect it to work as other apps do.

On the other hand, Apple does sync active internet accounts over iCloud from Mac to Mac, and I’d love to see them extend this feature to iOS. If so, it’s possible there would be a way to sync from device to device in a way that kept everything locally – perhaps it could only sync over the same Wi-Fi network? Either way, it’s great to see Apple adding some new features to its default Mail applications.