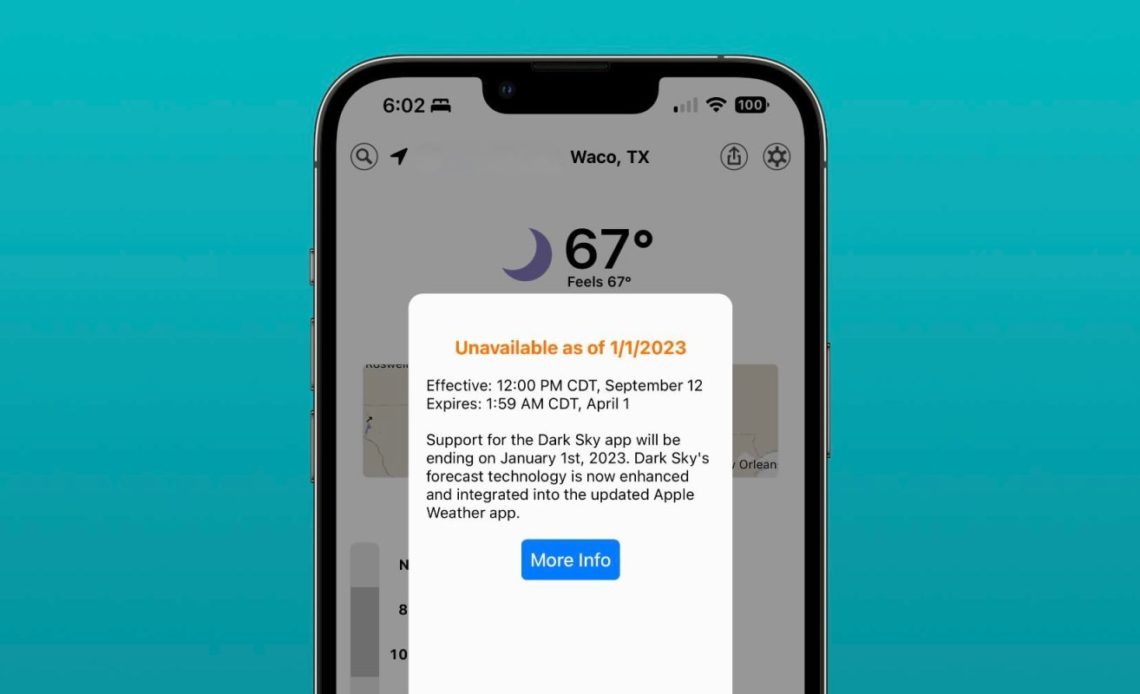 Apple is moving forward with its plans to shut down the Dark Sky weather app at the end of this year. If you open the Dark Sky app today, you’ll see a new pop-up message telling you that “support for the Dark Sky app” will end on January 1, 2023. This comes a day after iOS 16 debuted with more changes to the built-in Weather app…

Apple had previously planned to begin shutting down the Dark Sky app, website, and API at the end of 2021. This change was delayed until the end of 2022 as Apple continued to make upgrades to the built-in Weather app as well as launch the new WeatherKit API. Apple originally acquired Dark Sky in March of 2020 and has used the technology to make a number of upgrades to its built-in Weather app.

Now that WeatherKit is available to developers and iOS 16 is available to everyone, Apple is officially informing users of its intention to shut down Dark Sky. Those hoping for another delay are unfortunately out of luck.

Support for the Dark Sky app will be ending on January 1st, 2023. Dark Sky’s forecast technology is now enhanced and integrated into the updated Apple Weather app.

Tapping on the “More Info” button in the message takes you right to the App Store listing for the Apple Weather application. Yesterday’s release of iOS 16 included new features for the Weather app:

Apple is also offering its own WeatherKit API to developers, allowing third-party apps to tap in to weather data that is hyperlocal as well as focused on protecting user data and privacy. Prices for using WeatherKit are also much cheaper than other weather APIs, including Dark Sky. You can learn more about the new WeatherKit API here.

Are you still clinging to Dark Sky or have you moved on to another weather app? Let us know down in the comments.