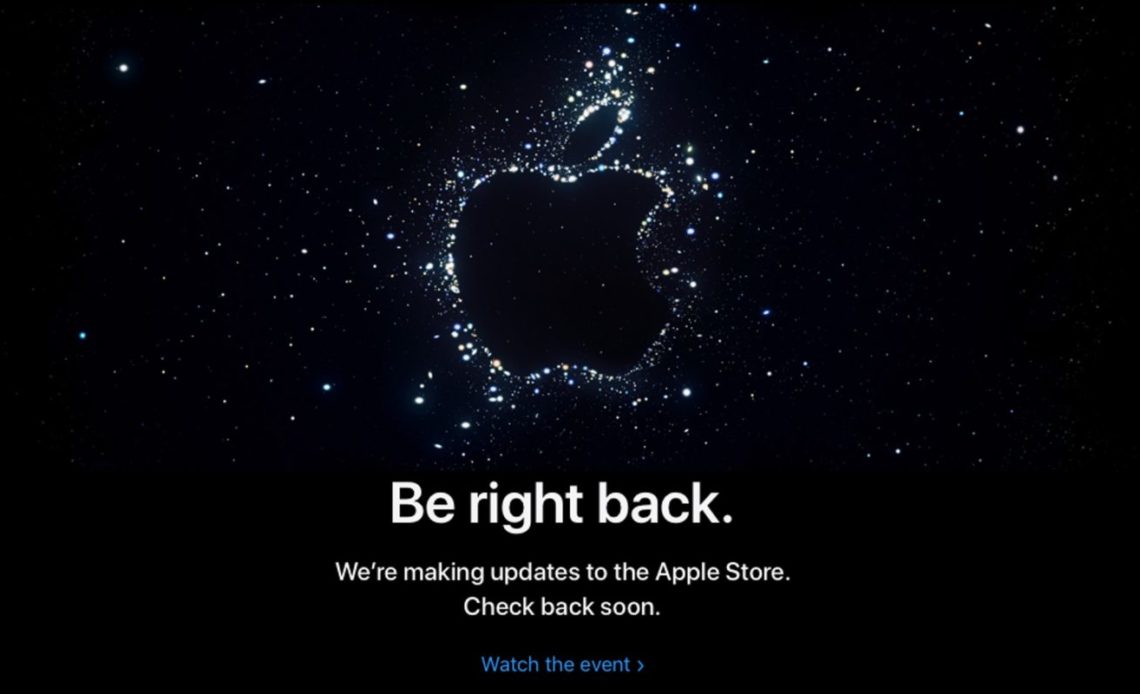 Apple continues the ceremony of taking down the online store ahead of its major hardware events. The Apple Store is down and is expected to come back up around 12 PT, directly after the conclusion of the live-streamed September Apple event, entitled ‘Far out’.

In an incredibly technological upgrade for the Apple website, the ‘Apple Store is down’ placeholder page now includes a link to watch the event live stream on Apple.com. The Apple logo is also in the style of the event’s space-themed artwork. Previous events would merely use a generic Apple logo on this page.

New features for the iPhone 14 will include upgrades to the camera system, with an upgraded autofocus-enabled selfie camera, and a new 48-megapixel rear sensor for the Pro models. Emergency text messaging transmitted over satellite connectivity is also rumored, to be used sparingly when you are stuck without cell reception.

What’s new with the iPhone 14

The chassis and industrial design won’t be changing much. The iPhone 14 will look about the same as the iPhone 13. However, the iPhone 14 Pro will feature a new notch design; instead of the attached pull-tab appearance, there will now be hole-punch and pill shape cutouts. Many expect that these two holes will appear as a single pill shape, with the OS filling in black pixels to cover the gap.

The 5.4-inch ‘mini’ size is dead, however. Instead, Apple is bringing the largest iPhone screen size, 6.7-inches, outside of the Pro line for the first time. This means the base model iPhone lineup will be available in both 6.1-inch and 6.7-inch sizes. The new starting price of the 6.7-inch model should be around $900, a much more accessible price to consumers. The rumor mill expects it to be named ‘iPhone 14 Plus’, and it will likely be a big seller when these phones go on sale in a couple of weeks.

The headline iPhone 14 Pro feature will be the addition of an always-on display. This means the iPhone screen will permanently stay lit in a low-power state, showing the time, notifications and iOS 16 lock screen widgets. This will bring the iPhone more in line with the Apple Watch experience, which has featured an always-on clock face since the Series 5.

Speaking of watches, the Apple Watch Series 8 is also expected to be announced by Apple today. The new models are believed to add a body temperature sensor. However, most of the attention will be on the brand new ‘Apple Watch Pro’, an even larger addition to the Apple Watch family sporting a 1.99-inch screen, new chassis design and likely tout several days of battery life.

A big question mark is how much this will all cost. How will Apple handle the current trends of wider market price inflation? There have been rumors that the Pro phones will be more expensive than their iPhone 13 Pro counterparts, although they may pack in higher base storage to compensate. The Apple Watch Pro pricing is expected to be in the $900-$1000 range.

Outside of Apple Watch and iPhone, there’s a chance that Apple will showcase other new products — but this is where things are much more murky. New iPads, Macs, and a new version of the Apple TV set-top box are all possibilities …. but Apple will most likely save these products for a second media event in October. AirPods Pro 2 are on the docket for today, according to the latest rumors, though.

Stay tuned to 9to5Mac for full coverage of all the announcements, starting at 10 AM Pacific Time.