Apple Books app not working for many users after iOS 15.5 update 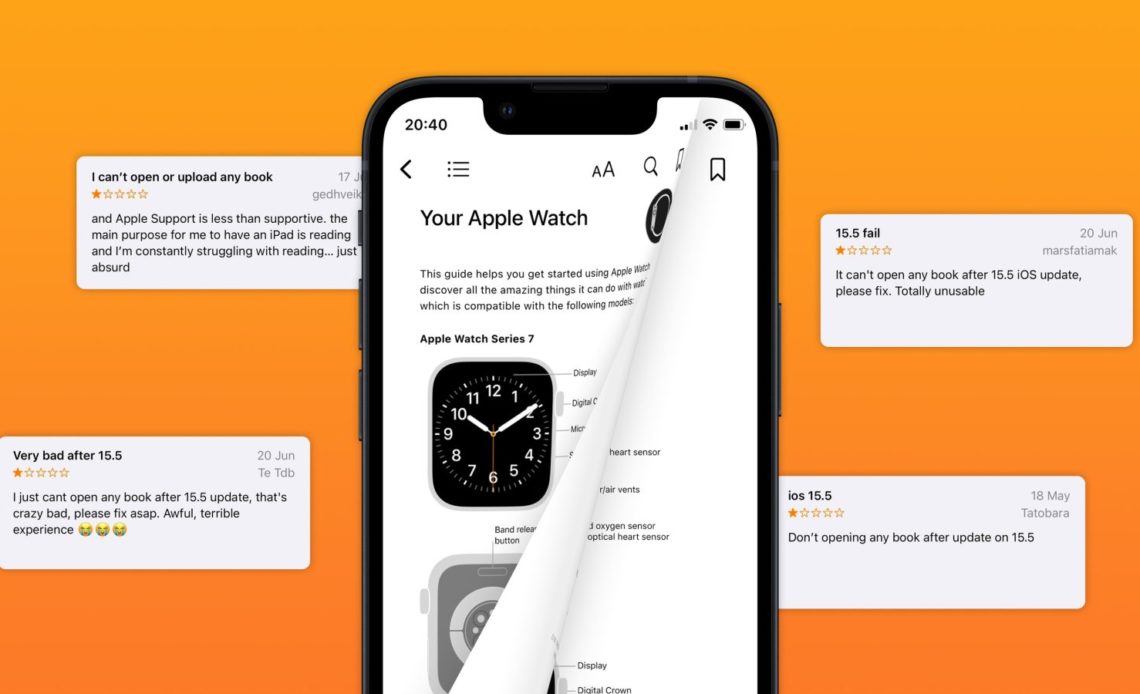 Apple released iOS 15.5 in May with enhancements to the Podcasts app, Apple Cash, and overall bug fixes. However, it seems that the update also caused some issues for Apple Books users as the app stopped working for some people after the iOS 15.5 update.

9to5Mac has received reports that Apple Books crashes when the user tries to open any book in the app after updating iPhone and iPad to iOS 15.5, which is currently the latest version of the operating system available to the public.

It’s unclear at this point how many users have been affected by the bug, but App Store reviews for the Apple Books app corroborate that there are a reasonable number of users experiencing some issues with the app. Pretty much all the negative reviews say that Apple Books no longer opens any books after the update.

“I just can’t open any book after 15.5 update, that’s crazy bad” said a user. “The main purpose for me to have an iPad is reading and I’m constantly struggling with reading” another user commented on an App Store review.

A fix for Apple Books might be on the way.

Luckily, it seems that a fix for the Apple Books bug is on the way. 9to5Mac tried to reproduce the issue on devices running iOS 15.6 beta and also iOS 16 beta. In both cases, Apple Books was working as expected.

While the official release of iOS 16 is expected this fall, iOS 15.6 should become available to all users in the coming weeks. We usually don’t recommend installing beta versions of iOS on your personal iPhone or iPad, but this might be a good solution if you’re having problems with Apple Books.

Unlike iOS 16, iOS 15.6 is now available to users as a public beta. And since this update brings only minor changes, it is much more stable than iOS 16 beta. Of course, we can’t guarantee that iOS 15.6 beta will fix the Apple Books bug on your device, but it might be worth a try.

Here’s how you can install iOS 15.6 beta on your device:

After the official iOS 15.6 release to the public, go to Settings > General > VPN & Device Management and tap “iOS Beta Software Profile” to remove the profile and no longer receive iOS beta updates.

You can check out our full guide on how to install iOS 15 beta on an iPhone or iPad.