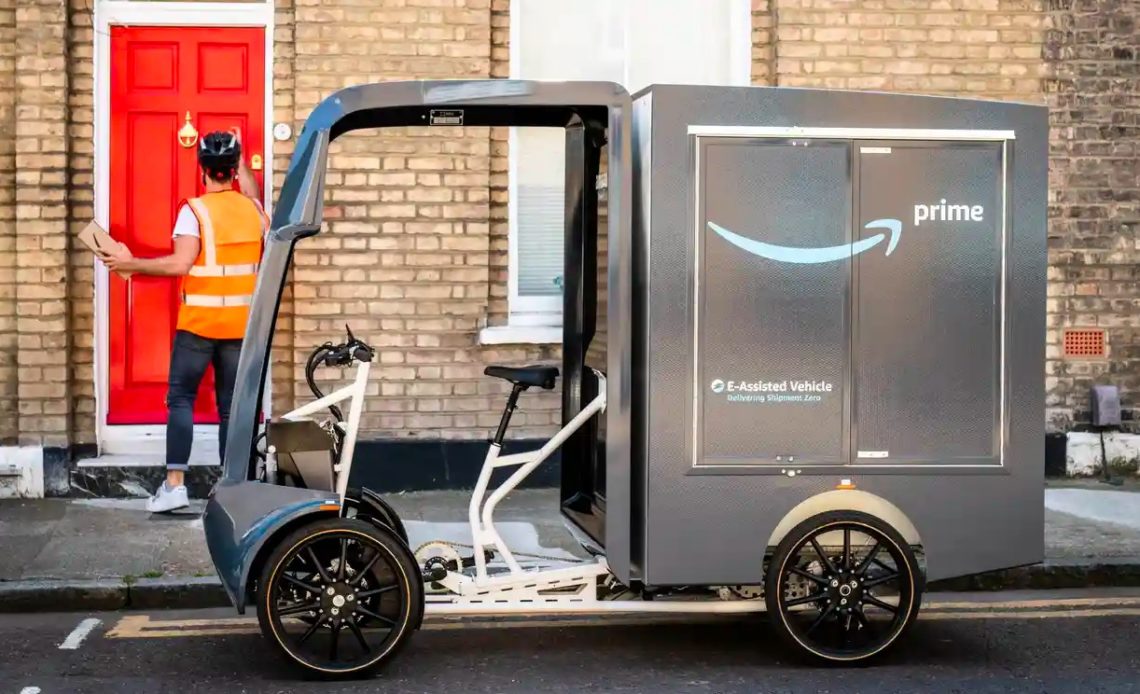 The first city to see Amazon make the switch is London, where the company is beginning a trial with electric cargo bikes – but these aren’t your typical two-wheeled electric cargo bikes. In fact, they aren’t even the common delivery e-trikes we’ve seen before.

These are four-wheeled electric cargo bikes that look similar to a miniature delivery van, but use an e-bike drivetrain for propulsion. That means the driver is actually a rider who sits on a bike seat and pedals the vehicle to engage an electric motor that magnifies his or her pedaling force. Ultimately, most of the power comes from an electric bicycle battery, though the rider does add a fair amount of pedaling power too.

The vehicles are usually limited to a maximum speed of 25 km/h (15.5 mph), which is generally sufficient for delivery purposes in crowded city centers.

Amazon will also be expanding the use of walking deliveries as well, which are much more efficient in dense urban areas that can be managed by mobile package hubs that resupply the delivery walkers.

According to The Guardian, Amazon will begin its electric cargo bike testing in the East London borough of Hackney where the e-bikes will be operated by Amazon’s partners. There, they will join an extensive electrically-powered fleet of full-size Amazon delivery vehicles.

The electric vehicles in the fleet make a combined 5 million deliveries a year in the area.

Amazon is driving towards a global net-zero carbon future. One way we’re doing that is through the transformation of our transportation networks. Our new e-cargo bikes, walkers and growing electric vehicle delivery fleet will help us make more zero emission customer deliveries than ever before across London and the UK in the coming months.

Amazon of course isn’t the only delivery giant to explore the use of four-wheeled electric cargo bikes for deliveries in densely populated urban areas.

UPS began testing a similar four-wheeled electric cargo bike that looks like a miniature UPS van in Scotland a few months ago. The company then began testing the same vehicles in NYC, another area that lends itself well to deliveries via micromobility vehicles.

DHL is testing a similar vehicle as well in the UK.

The United States Postal Service (USPS) has also been testing out electric bicycles for package delivery, though has opted for three-wheeled electric tricycles instead. Those vehicles are built in the US by the American company Coaster Cycles and designed for carrying large loads such as an entire day’s mail route.

The giant rear cargo box provides 72 cubic feet (over 2,000 liters) of space for mail, and the bike can hold up to 400 lb. (181 kg) of cargo. Hydraulic disc brakes help bring all of that weight to a stop quickly and safely.

Powering the bike is Bosch’s Cargo Line e-bike drive system, which supplies the rear wheels with 85 Nm of torque. The drive system is paired with a 500 Wh battery to power the mid-drive motor, though multiple batteries can likely be swapped in to extend the range.

As delivery companies continue to seek out more efficient ways to disperse packages in cities that are increasingly prioritizing people-first urban planning, large delivery vehicles are quickly starting to look like dinosaurs in these changing cities.

Smaller and more efficient bicycle-based delivery vehicles therefore could eventually comprise a majority of the delivery vehicles in city centers, likely much to the joy of city residents who rely on deliveries but suffer from the congestion and inconvenience of large parked vans.