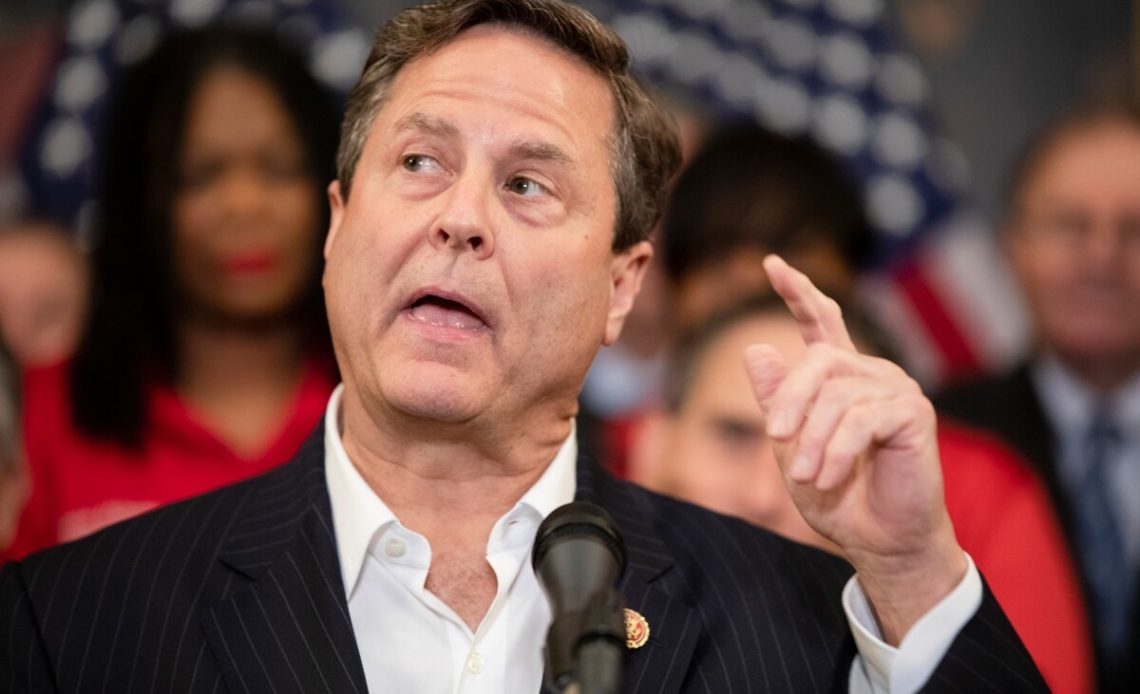 But the New Jersey Democrat, whose proposal faced criticism it would lock out allies, told Defense News in an interview last week that he plans to have the conversation again when this year’s National Defense Authorization Act is drafted.

“I expect to have a Buy American provision in there, and I’m told that our allies on the other side of the aisle will work with us. But as [President] Ron Reagan said, we will trust but we will verify,” said Norcross, who chairs the House Armed Services Committee’s Tactical Air and Land Forces Subcommittee.

Norcross represents a portion New Jersey’s Delaware Valley, with an eye on Joint Base McGuire-Dix-Lakehurst, Picatinny Arsenal and shipbuilding efforts at the nearby Philadelphia Navy Yard.

He was named this month to a new House Armed Services Committee task force on defense supply chain vulnerabilities, which is expected to tee up fast legislative fixes for inclusion in the NDAA. It follows an order from President Joe Biden on the topic.

This interview has been edited for length and clarity.

What are your priorities as subcommittee chairman?

Each year, the NDAA provides us the opportunity and mandate to review our priorities for the country’s defense. For the Tactical Air and Land Subcommittee, that means looking over the programs in our jurisdiction, and modernization, and making strategic decisions.

The pandemic impacted virtually every part of our lives, including defense. Our goal is always to train and equip [U.S. military personnel] with the best available equipment, to make sure that they go into a fight way ahead of the game and better than anybody else. The last 12 months has taught us a critical supply chain includes a skilled workforce and made us ask, ‘where does that material come from?’ This plays into the new task force, but there are some other areas that we’re looking at. One is the ammunition industrial base and the challenges there, and how the next generation of workers will make sure the best equipment is available.

We are expecting a flat defense budget proposal from the president, but there are progressive efforts to cut steeply as well as GOP efforts to boost defense by 3 to 5 percent. What’s the right path, and how does this play out with the slim Democratic majorities in Congress?

It’s a great question, and it’s certainly on everybody’s minds. The new administration is reviewing where our priorities are, where the risk is, not only now but where it’s going to come from. Our chairman has said a number of times ― and I’m perfectly aligned ― that we’re going to make sure that we have the resources to defend our country. That is a very simple and direct answer, and then it gets complicated, reviewing every program and what the risks of not funding are versus other priorities. We are expecting a flat top line, which normally is a straight answer, but what is a flat top line, because there are those who are saying a 3 percent increase is a flat top line when adjusted [for inflation]? I look at it as a review of our present spending and where can we do it better.

There seems to be some extra pressure on the F-35 fighter this year. HASC Chairman Adam Smith recently called F-35 spending a ‘rat hole,’ and suggested the U.S. cut its losses by investing in a mix of of other fighters. Where are you on slowing or cutting the F-35 buy?

You suggest there’s some extra scrutiny. There has always been a tremendous amount of oversight, and there should be on the most expensive program in the history of the United States. It has been in development for many, many years, and those production costs are dropping somewhat. One of the real challenges is the sustainment end of this equation. And that’s not a surprise. Seventy percent of the aircraft’s lifecycle cost is defined by maintenance and sustainment. Historically, there’s not as much focus there, but it’s where the dollars are, and certainly what we’re being challenged with today. It has to be affordable, or its coming out of another program, and that’s a problem.

That’s where you review these things and say, ‘Can we do it better?’ I don’t think the costs are a surprise because we’ve been talking about it. The surprise, if anything, is how do we fix it. We’ve been chasing this, and it’s a major focus of Tac Air Land.

GAO has put out reports that the program’s software development’s lagging and that the development costs have grown by roughly $2 billion since 2019. What kind of action are you looking at, and is Congress looking at buying fewer F-35s if costs don’t come down?

In the history of air frame production, the original target cost, generally, is never going to be the same at the end because we learn things across the development. So we need to hear from Pratt & Whitney and Lockheed on some very issues you brought up. The ALIS [software] system has been written about for years, and we’re finally going to [replace it with a newer system]. Extremely important, there. But we also need to hear from the service chiefs. They’re all looking at how is this going to fit into today’s world but also five years, 10 years down the road. It takes quite some time to develop new platforms.

If we’re looking at budgetary trade offs, the A-10 is one platform that’s been particularly hard to kill even when the Air Force has wanted to do it. If its upcoming tactical air study proposes retiring the A-10 before the 2030 timeframe the Trump administration wanted, do you think Congress will finally allow it?

Well, the A-10 is still to some degree a great platform, and in the Middle East, we saw the value of that. The F-35 was going to take the role of many different platforms and this comes down to whether the F-35 will be a multi-domain platform. That certainly is in question. We continue to invest in the A-10, and the wings were just part of an update that’s going on. The service chiefs need to weigh in here in terms of cost and affordability.

While that platform performed extremely well in the Middle East, will it be the platform we’re going to need against a near-peer competitor? We don’t know. Certainly there’s a lot of questions, but the service chiefs are doing a study of what that will look like and the basis for where we invest in the future. That’s all coming together as we speak.

With flat budgets, is there anything within your portfolio as chairman that is under particular pressure, whether it’s F-35 or something else?

What I’m not going to do is show my cards. Again, everything is measured against what your threat is, and the threat of a year ago could be very different in the future. Our competitors are increasing their capabilities and that impacts [U.S. investments in] every platform. Is the F-35 that was in the planning stages almost 20 years ago equal to the task it’s going to face against Russia or China, because they very much understand our capacity and technologies ― and they’re trying to defeat them. If measured against nothing, then [the U.S. arsenal is] fine where it is, but they’re increasing their ability to challenge us, particularly in the air.

You’re on the new HASC supply chain task force and have in the past championed ‘Buy America’ language in the NDAA. The task force’s co-chair, Rep. Mike Gallagher, said he wanted to emphasize a ‘Buy Allied’ approach. Is there tension between those two ideas or room for compromise?

I’d say there’s little daylight between Rep. Gallagher’s statement and where we are. He was part of a conversation almost six years ago when the Navy was bidding out a new frigate and the propulsion system wasn’t domestically supplied ― and that started a much heavier debate. Each year we have discussed trying to increase the domestic content of only major acquisition programs, but let’s be clear that this is a massive issue and we were just taking a bite out programs we have control over.

We didn’t know four years ago there was going to be a pandemic, but the things we talked about then ― building up our workforce and critical supply chain, that we should ‘Buy American’ ― were just proven through this pandemic. Obviously, we have partners and allies, and we import and we export, and this in no way means that we’re going to shut off our friends and allies. But certainly we can increase our capacity. We did it years ago and still have friends and allies, and I think we can again, incrementally, focusing on critical areas where there are material and workforce capacity challenges. We have to identify those, set the goals and start working towards them in a predictable way that industry can follow. I believe the NDAA this year will start focusing on bringing some of that back, along with our allies and partners.

What areas of American manufacturing are ripe for reshoring? What action is coming in the NDAA?

We have to have control of those critical supply chains. Remember the Chinese are very focused on trying to have a boot on the throat of America, so that it can cut off some of those critical supplies. I think we’ve done a decent job of trying to identify them, but each time we make a move, there’s somewhere else. If we go to those allies, and obviously there’s private suppliers, who owns them? So it’s very deep and complicated. It’s not just about the first tier but the second and third tiers. So the executive order by the Biden administration is a great way to start, looking at where those cracks in the foundation are.

This is going to be an ongoing issue and not a one year and done. With the one-year review, you have a pathway where we’re going to try to bring back some of that capacity. As important as the materials are to a product, [building the blue collar] workforce to produce it is just as important. The narrative in America has been that the only way to make it is go to college, and that’s extremely important for those who want to. But we still need welders and electricians, and those who can build our ships and our aircraft, and they’re not all PhDs or come from the Ivy League. Men and women in this country just need a chance to work in an area that builds our capacity.

The ‘Buy America’ approach doesn’t say forget about our allies, it says we need to work through this together. But honestly, look at what happened in Turkey [with the F-35], and that’s just one indication of how critical and how fragile sometimes this supply chain is. I expect to have a ‘Buy America’ provision in there, and I’m told that our allies on the other side of the aisle will work with us. But as Ron Reagan said, we will trust but we will verify.