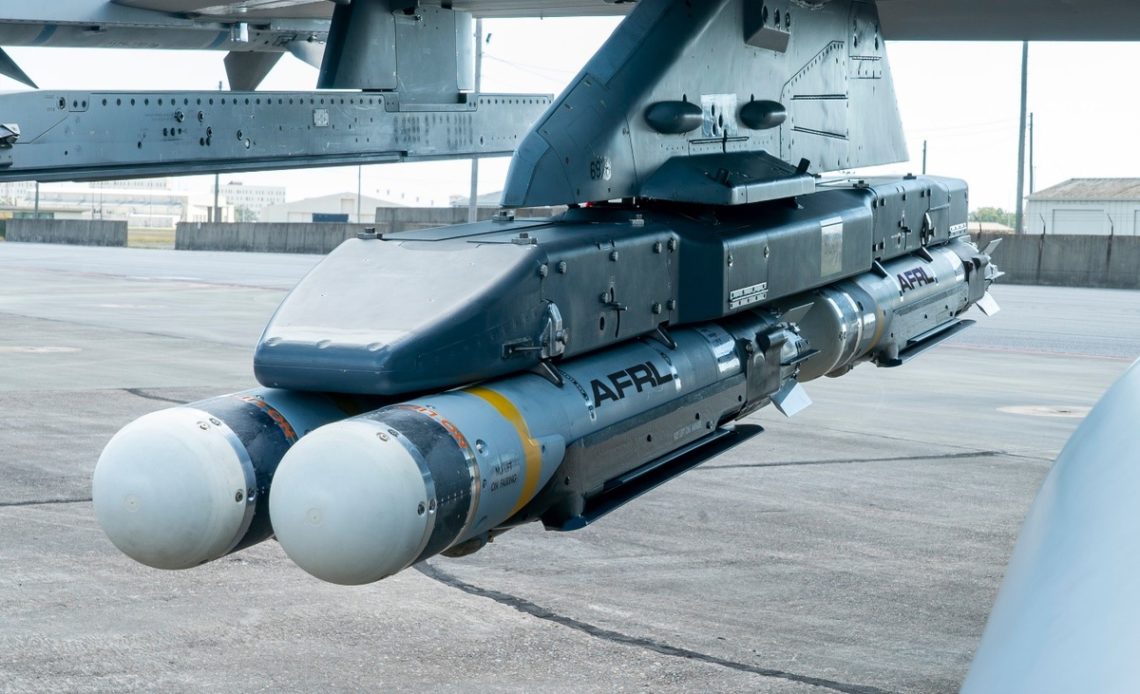 WASHINGTON — After the Air Force’s first test of “Golden Horde” swarming bombs was deemed a partial success, the service will give the technology a second shot later this month, the commander of the Air Force Research Laboratory said Thursday.

The Golden Horde program is one of AFRL’s three top priorities. The effort involves networking a swarm of munitions together and equipping them with an operational playbook, which gives them a set of predetermined rules for autonomous operations.

“We’re looking forward to two more flights this month, in fact, with four collaborative small diameter bomb weapons, and I’m looking at time on target to try to up the game a little bit,” Pringle said during a Feb. 4 event hosted by the Mitchell Institute for Aerospace Studies. “This program is still progressing, and we’re really excited about where it’s going in 2021.”

Although the program met nine of 13 objectives during the December event, Pringle acknowledged that not everything in the first test went according to plan.

During the flight, an F-16 dropped two Collaborative Small Diameter Bombs, a version of Boeing’s laser-guided Small Diameter Bomb I upgraded with a collaborative autonomy payload. According to an Air Force news release, the bombs were able to establish communication links with each other and detected an initial target — a GPS jammer.

However, the munitions are designed with an autonomy module that allows them to respond to changes on the battlefield, and the bombs sighted two higher priority targets, which had been determined by Air Force mission planners before the flight and programmed into the weapons’ rules of engagement.

Unfortunately, due to software issues, the swarm was not able to transmit guidance commands to the navigation system, and the weapons struck a failsafe target location instead.

“We had uploaded an [operational flight plan] that couldn’t accept updated flight profile information from the autonomous onboard processor. And so ultimately, the initial flight profile that was in it is where it ended up,” Pringle explained. “There was no update, and the flight never changed. But we have done the forensics on it, we’ve corrected what needed to happen.”

Despite the setbacks during the first test, the Golden Horde concept still shows much promise, Pringle said.

Next week, she intends to meet with Brig. Gen. Heath Collins, the Air Force’s program executive for weapons, to discuss the future of the program and how to eventually turn the technology into a product that can be used operationally.

“General Collins and I have been reassessing what the overall long term scope is of this program and what the end deliverable will be,” Pringle said. “A major component of that is building a digital architecture that will allow more testing of various kinds of collaborative technologies and building in some containerized solutions that could be more plug and play across weapons. And I think ultimately, that will allow a lot more flexibility.”

Col. Garry Hasse, director of AFRL’s Munitions Directorate, told Defense News last year that the CMALD would be ready for its flight tests onboard a B-52 in summer 2021.

Eventually, AFRL will use the two systems together in an integrated swarm in a more complex scenario, currently scheduled around 2022, said Norma Taylor, the program manager for Golden Horde, during an interview last June.

The integration of hardware and software on the Golden Horde program is being performed by Scientific Applications and Research Associates Inc. — which won a $100 million contract in 2019 for CSDB-1 — and Georgia Tech Applied Research Corporation, which won $85 million for CMALD.