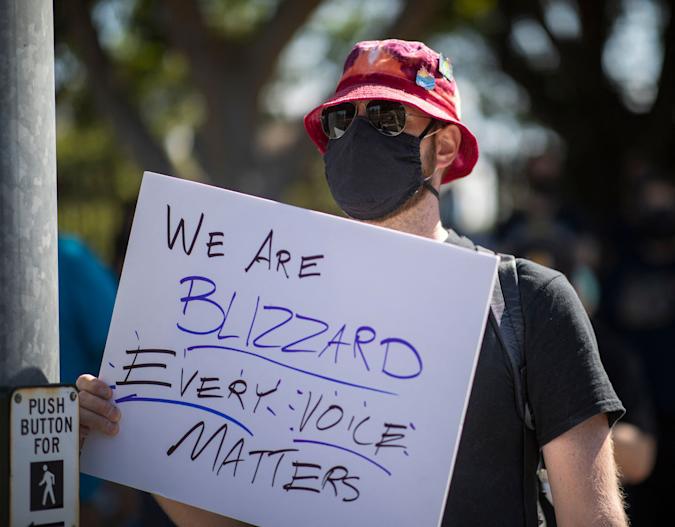 As detailed by The Washington Post, the group’s demands include ending mandatory arbitration in discrimination cases, improving on-site lactation rooms, protecting workers from retaliation, increasing support for trans employees and instituting independent investigations in cases of discrimination, including sexual harassment. The employee group, called the Worker Committee Against Sex and Gender Discrimination, submitted their demands to the studio’s leadership team today.

The committee specifically demands private lactation rooms and appropriate storage spaces for breastmilk and pumping equipment. Breastfeeding workers at Activision Blizzard have documented their issues with the studio’s lactation rooms, describing them as filthy, uncomfortable and poorly secured. Employees said fridges for breast milk were also used to store beer, that people pumping often had to sit on the floor and that breast milk was sometimes stolen. In regards to trans rights, the group demands the creation of a trans network similar to the in-house women’s resource network and for software tools to be wiped of employees’ deadnames.

In response to the formal call for change, an Activision Blizzard spokesperson provided Engadget the following statement: “We appreciate that these employees want to join with us to further build a better Activision Blizzard and continue the progress we have already made. We have, for example, already upgraded our lactation facilities, waived arbitration, hired new DEI and EEO leaders, and collaborated with employees to make our policies and processes more trans inclusive, just to name a few issues the letter raises. We thank these employees, and will continue to work with all of our employees on our journey to be a better company.”

In October 2021, Activision Blizzard changed its policies and waived mandatory arbitration for individual sexual harassment and discrimination claims. The company intends to extend this policy to class actions regarding sexual assault or harassment, in order to comply with a US law enacted in early March 2022 banning these types of arbitration agreements.

The workers’ demands include:
-End of all mandatory arbitration
-Independent Investigations for all claims of discrimination including sexual harassment
– Lactation Protections
– Trans Protections
– Protection from retaliation and more

Backed by the Communications Workers of America, Activision Blizzard employees have been advocating for change and unionization — to some degree of success — since the lawsuits were filed. CWA called the $18 million settlement “woefully inadequate,” arguing it would provide the maximum compensation to just 60 workers, when there were likely hundreds of claimants.

Former Activision Blizzard employee and campaign organizer for the tech-industry group CODE-CWA, Jessica Gonzalez, appealed the $18 million settlement this week, seeking an increase in compensation. Gonzalez is one of the 12 employees in the Worker Committee Against Sex and Gender Discrimination.

An additional lawsuit accusing Activision Blizzard of sexual harassment, discrimination and retaliation was filed this week by a current employee. And there’s the wide-ranging investigation into the studio’s workplace practices currently underway at the Securities and Exchange Commission.