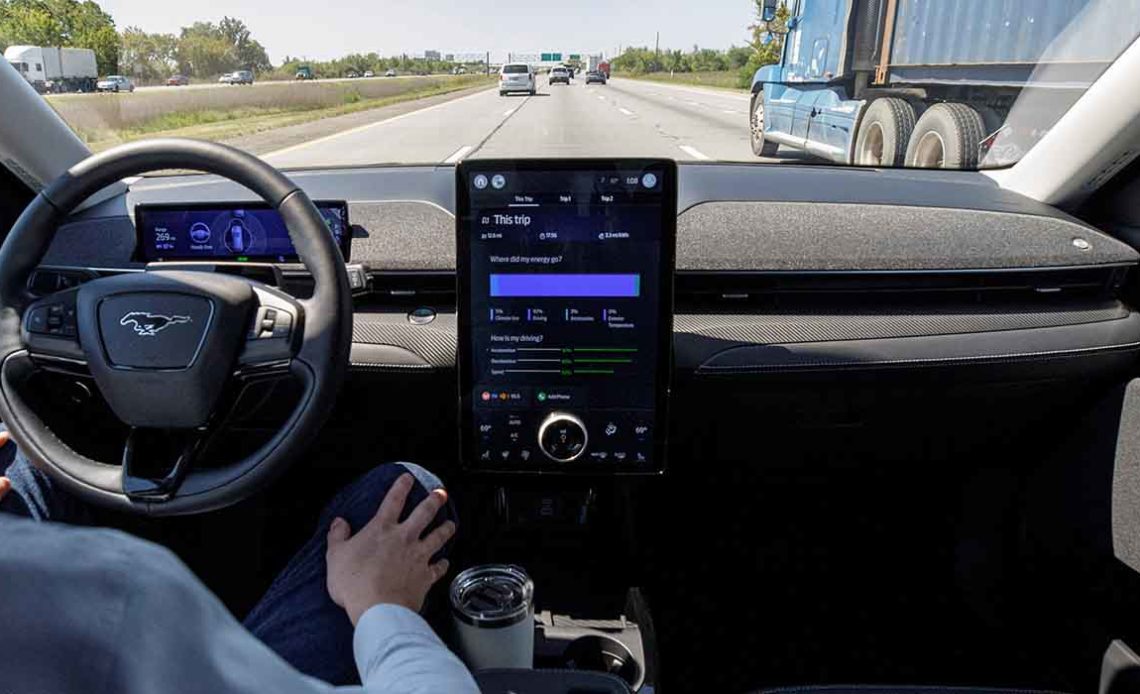 Beginning this fall when its next-generation BlueCruise 1.2 active driver assist rolls out, Ford is introducing three new features, including hands-free lane changes. The American automaker says it has bolstered its Advanced Driver Assist Systems (ADAS) team to improve BlueCruise and ActiveGuide for Ford and Lincoln drivers. That being said, current drivers will have to wait to experience these new hands-free features.

Ford Motor Company first shared details of its BlueCruise hands-free driver assist system in April of 2021, when it debuted on the Mustang Mach-E. At the time, Ford compared BlueCruise to Tesla’s Autopilot, stating the following:

BlueCruise is an SAE Level 2 driver-assist technology, similar to Tesla Autopilot but with the advantage of offering a true hands-free driving experience while in Hands-Free Mode that does not require a driver’s hands to stay in contact with the steering wheel, unless prompted by vehicle alerts.

And unlike other approaches – such as GM’s Super Cruise, which uses red and green lighting, or Tesla’s Autopilot, which requires a driver keep their hands on the steering wheel – BlueCruise communicates with drivers in different ways. The instrument cluster transitions to communicate that the feature is in Hands-Free mode through text and blue lighting cues, effective even for those with color blindness.

As we pointed out at that time, its rare for an automaker to directly call out not just one, but two competitors in a press release, especially fellow American businesses. But “all’s fair in love and war,” and Ford is definitely ready for a battle against those two for the EV sales crown this decade.

Ford said BlueCruise would be coming to the Mustang Mach-E, followed by the Ford F-150 Lightning, via over-the-air update. Now, Ford has announced a new and improved driver assist, but it appears only 2023 Mustang Mach-E owners will get to experience it, at least to start. Check out Ford’s BlueCruise latest video below.

According to a press release from Ford, BlueCruise 1.2 will arrive this fall alongside ActiveGlide 1.2 for Lincoln owners. Ford says that over 75,000 drivers have combined for over 16 million miles of hands-free driving to date and that its team has been working to improve the driver-assist technology to deliver a more human-like feel when active.

We are investing in our ADAS team to constantly improve BlueCruise and ActiveGlide for our customers. The latest improvements allow customers to command lane changes using just a turn signal, and make hands-free driving feel more human-like by smoothly slowing down for turns, and giving more room to large vehicles in neighboring lanes. These improvements are just the beginning of a constant journey toward improving safety and, in the future, giving customers valuable time back.

According to the release, Ford’s BlueCruise 1.2 will include three new hands-free features:

Ford says its dedicated ADAS team has also been continually improving maps with over-the-air updates to identify prequalified sections of highways where BlueCruise can be used. Those roads currently span over 130,000 miles.

Ford states that BlueCruise 1.2 will roll out in 2023 Mustang Mach-Es directly off the assembly line, but any previous owners of other Ford vehicles (2022 Mach-E owners included), are going to have to wait.

We asked Ford if any other vehicles would be able to access the latest BlueCruise features via an OTA update, and we were told not yet. A Ford representative said the company will share more information about Ford Power-Up and Lincoln Enhance software updates at a later date.